EDITORIAL: The Necessity of Finnick Odair

WARNING: This post discusses Finnick’s story arc in Mockingjay and contains major spoilers! If you have not read Mockingjay then I strongly suggest you close this window now.

For everyone else, let’s continue.

Some weeks ago you may recall the following “statement from Suzanne Collins” (or a variation of) doing the rounds:

“He will not die in the movies,” says Collins. “That will help undo my mistake.”

It appears to have started mainly on Tumblr not long after J.K Rowling sent the Potter fandom into a spin, with many bloggers choosing titles like “BREAKING: Suzanne Collins, author of the “Hunger Games” trilogy, regrets killing off Finnick Odair”, before spreading across other social media networks.

It’s interesting to note how the “he” in the statement is interpreted – many people jumped to the conclusion that it meant Finnick, but why could it not have meant many other characters such as Boggs, Mitchell, Homes or Messala? I believe the “he” being interpreted as Finnick, never mind the ‘statement’ itself, is nothing more than a ploy to prey on fans of one of the most popular characters of the books and generate a few hits.

Anyone who has been around the fandom long enough can refute this ‘statement’ based on two simple truths we know about Ms Collins: timing and tone/language.

Ms Collins rarely speaks about her books publicly, nor their movie adaptations. On the few occasions she has gone on the record these have been directly prior to a movie’s release, not months later when nothing is happening. She enjoys her privacy and shies away from media attention, so why would she comment on the Mockingjay films so far from their release? Especially considering the above relates to content in Part 2, which isn’t due until November 2015.

The tone and language of the statement is also rather simple, and as book readers we know Ms Collins tone and language are anything but. Have you read the TIME interviews with Francis Lawrence and Ms Collins prior to Catching Fire? Her answers were incredibly detailed and well thought out and nothing like what is written above.

So, we can confidently conclude this is a rumour and really a pretty thoughtless one. However, it has brought up an interesting discussion point: the importance of Finnick’s death and how it will also play out on screen.

Finnick is a favourite character for many of us, including Ms Collins, and one of the most emotionally devastating deaths in a series with many. You only have to do a quick Google search to reveal thousands upon thousands of fan works and the search “why did Finnick have to die” returns 135,000 results. It’s the million dollar question that can be answered in a multitude of ways and it also means different things to different people. For me, Finnick’s death is probably the one that teaches readers the most about war and its consequences.

Ms Collins has talked about her father’s experiences with war and growing up learning about the history behind several conflicts. In her own words, this has driven her to write about “the idea of the necessary or unnecessary war.” The Hunger Games trilogy questions this many times and continually blurs the lines between what is necessary and what is not. Whilst it isn’t referenced in canon I believe Finnick would have had a choice not to participate in the final push on the Capitol, but he believed in the “necessary war” to change the future of Panem and went with Katniss and Squad 451. 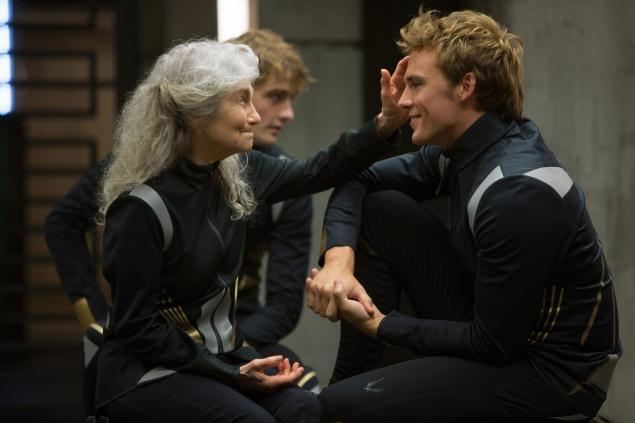 Finnick’s death becomes even more tragic when you consider his manner of death and the unborn child he leaves behind. War leaves a mark on generations and Ms Collins certainly wanted us to feel that. What better way to demonstrate this than through Finnick and Annie’s child? Their child is also one of Finnick’s greatest motivators in joining Squad 451 – if he cannot help put an end to the Capitol then what hope is there for their child, who would no doubt be reaped in a future games. It’s no coincidence that this draws stark parallels with many conflicts in history, where combatants fought for a better future for their own.

Lastly, Finnick’s death is also important in terms of providing hope for the future, just as Prim’s does for Katniss. His death isn’t in vain and without Finnick’s effort and sacrifice Katniss would not have made it as far into the Capitol as she did. It must be included on screen just as it is in the book, to show that war spares no one, no matter how noble, and to help deliver the warning of a cause for change. To leave it out would be a major disservice to the novels and by extension the films, both as an enjoyable and full circle story and as a message for all generations.

Tash is a 28-year-old Australian currently working in communications and media. A keen WW2 history enthusiast, particularly when it comes to the airborne, Tash also enjoys gaming, car detailing and spending far too much time on the Internet.
@https://twitter.com/tashonix
Previous Photos From ‘Mockingjay’ Set Show Closer Look At Pods
Next BREAKING: Gwendoline Christie From ‘Game of Thrones’ Replacing Lily Rabe As Lyme