Elizabeth Banks and Natalie Dormer Talk About Their Characters in ‘Mockingjay’ 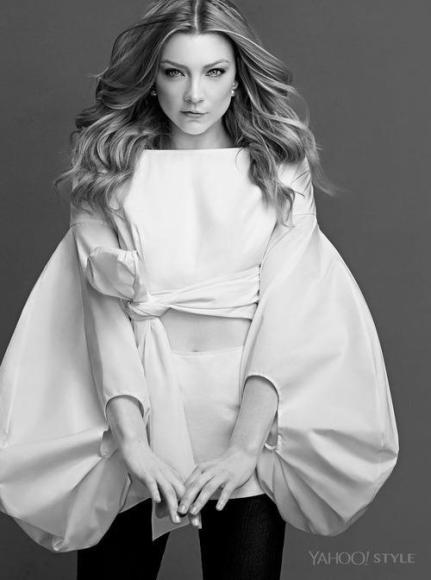 Now that several characters’ looks for The Hunger Games: Mockingjay Part 1 have been revealed via the District 13 posters and the Rebel posters, the cast is a little bit more free to speak about the transformations they had to go through for their roles in the film. Elizabeth Banks (Effie) and Natalie Dormer (Cressida) got around to speaking to the media about this topic over the past few days.

Elizabeth talked to E! Online about Effie’s new “bunker chic” look she will be sporting in District 13:

“Effie really is a fish out of water in District 13 and they do not have anywhere near the resources that the Capitol does,” the 40-year-old beauty, who is currently promoting her partnership with Doritos as part of the Crash the Super Bowl contest, told E! News. “So Effie really finds herself having to what I like to call ‘Project Runway her way’ through the wardrobe that’s given to everyone. Everyone gets sort of standard wardrobe in District 13 and she of course has to put her own twist on everything…she can make anything fabulous.”

She also mentions on how thrilled she is that Suzanne Collins and Francis Lawrence decided to give Effie more presence in the film than she had in the book. Interestingly, Elizabeth also states that she has seen the film (!), and gives us her comments:

“The scope and scale is huge,” the blond beauty revealed. “It’s really a true action film now, we’re not just in the Games anymore, we’ve really upped the stakes of the movie. It’s really about a full scale rebellion and a war between the Capitol and the Districts. So all the action sequences are just amazing and upgraded…action-movie level stuff going on, not just the story of a small-town girl.”

To read this and more of her comments about Effie, the film and her fellow cast members, you can head on to E! Online.

On her part, Natalie Dormer talked to Yahoo! Style about Cressida’s look, and how she got to rock the ‘do at several real life events:

How did the cut affect your personal style?
It opens you up to exploring more kind of punky, funky looks on the red carpet or at events. But I was actually quite surprised at Comic-Con—there’s a lot of lopsidedness going on. Girls are doing the lopsided thing, very tight…down one side so it almost looks like they’re shaved. That seems to be en vogue and I seem to be ahead of the curve. I don’t know if the Katniss Everdeen thing is catching on as well, but a lot of girls are wearing plaits to one side.

Apart from the hair, she also comments on the full military look the character sports in the film:

In The Hunger Games, Cressida is very much about PR, too—but she does it wearing fatigues and combat boots. What was that shift like?
Oh, I was glad to be out of the flowing silk skirts and to be running around with a semi-automatic rifle and army gear for a while. It was fun to be with the boys in the mud and the dirt, and being empowered in a physical sense. And now, after nine months of running around in dirt and water, it’s nice to get back into Margaery’s silk skirts.

To read what else she had to say about her look, her cast mate Jennifer Lawrence and her role as Margaery Tyrell in Game of Thrones, you can visit Yahoo! Style.

What do you think of what they have to say about their characters? Are you looking forward to seeing these two ladies in action in Mockingjay Part 1? Be sure to tell us in a comment!