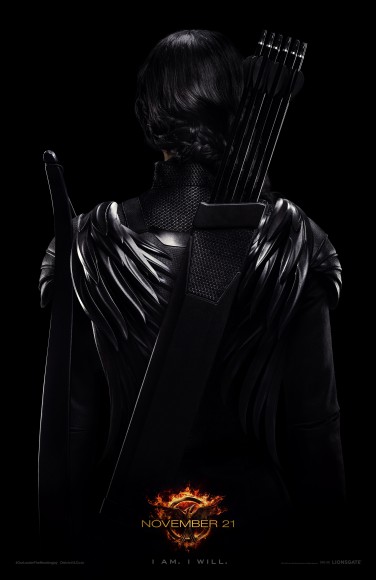 With new rumblings of a trailer and the 9/10 date looming before us, some of the Jabberjays are mapping out our trailer predictions in case something lands tomorrow (fingers crossed!!). Read what we think the trailer will consist of and then comment with your own so that we can see who is most on point with the marketing!

And if you have some inside scoop on the content, please refrain from spoiling the rest of us. 😉 Rumor is that the trailer has a runtime of 1:45.

Given the content of #OLTM, I think they’ll start off with a different angle and my hopes is that this is their chance to finally, really and truly bust out Katniss the Mockingjay. They’ve already established Katniss saying she’ll fight with them, so I think this will jump right into Katniss, still in District 8, fighting against the Capitol hovercrafts. I picture it starting with a conversation between Boggs and Katniss describing her hospital visit and how she did well, then frantic radio cries about incoming bombers. Katniss scrambles to the roof with Gale and a bomb hits the hospital, Gale explains what’s happened or it comes over the radio and Katniss becomes furious and shoots the bombers down. Cut back to District 13 and we’ll get some brief interactions of Coin and Plutarch with updates on the rebellion, then Katniss will be shown watching Peeta in a propo as he warns them about the attack and they move down below. Prim tells Katniss in the lower levels that Snow won’t kill Peeta because he needs to use him against her. Then it’ll cut to Katniss sobbing outside, Cressida will be the one to say, “What’s wrong with her?” Boggs will say she knows what Snow’s doing to Peeta. A quick cut of Peeta screaming. Katniss wakes up in the D13 hospital and Haymitch tells her they’re going to get them out.

Of course, that’s just my Peeta addled brain making it centered around him. 😉

I don’t have a real preference of how I exactly want the trailer to be, but there are a few things I would definitely like to see included in it. Based off of the last #OLTM trailer, I am expecting a ton of action to take place in this trailer! The teaser gave us a little taste of war, and ended with Katniss agreeing to fight with them. In this next trailer I’m hoping we see Katniss in action fighting, particularly the District 8 action scenes. Additionally, I would really like to see more of District 13 and the living conditions there. We got a tiny look at District 13 in the last trailer, and I’m hoping here we could see more of the citizens and life there. I don’t know about you, but I have been missing Prim a lot during this promotion, and I think seeing Prim in the next trailer would be awesome! I would love it if she got a line or two as well! Crystal’s prediction of Prim telling Katniss that Snow can’t kill Peeta because he needs him to use against Katniss would be a great addition to the trailer too. I’m hoping we see some form of Peeta in this trailer. Maybe Lions Gate will go all out and give us a heart wrenching shot of Peeta getting tortured too. That single shot would send waterworks to fans all over the world! Who knows? I am very excited to see the next trailer, and am hoping at least one of the things I have said is included in this trailer! 😛

I don’t have a full idea of what the trailer looks like in my head, but I know one thing: I want it to be a bridging device. We’ve seen what’s happening with Peeta and Johanna in the Capitol through the propos, and we’ve seen the war in the districts through the teaser trailer; now I want something that bridges the two together, and that something is Katniss. Not necessarily because I’m missing Katniss (I’ve mentioned before that I’m not that upset about her absence), but I think she’s the tie-in, the one who shows us that war is painful but necessary, sometimes, and if they’re really going to establish the Mockingjay films as true, deeply-reaching war movies, they need to show more than just action sequences. That’s not to say I think the trailer will be soft and emotional– a theatrical trailer for a blockbuster this size needs the action– but I’d like to see Katniss suffering because of Peeta’s absence, maybe a hint of Peeta’s torture (if they did film it), something to establish her fragile state of mind before they bust out into the District 8 action scenes… it would make her “I am, I will” all the more meaningful, the idea that this broken girl is the one who will be leading the rebellion.

Apart from that, I’d like to see some more of District 13 (the stairs bit in the last trailer was fun, but short, and apart from that the only part of D13 we’ve really seen is that one room where Coin and Plutarch were speaking to each other). And we really need to see Prim, maybe her trying to comfort Katniss at some point, because people are starting to think she’s not in the movie and that is so wrong on so many levels. It’d be nice to catch a glimpse of the rest of Cressida’s crew, if possible. And of course, any Peeta and Gale is more than welcome as far as I’m concerned. 😉

If you don’t make any predictions, then you can’t be disappointed, right?

Just give me Peeta saying “and you in 13… dead by morning” and Katniss shouting “If we burn, you burn with us!” and I will be one happy camper.

The trailer has been rumoured to be 1:45 minute long, and while that isn’t much, it’s quite enough to give us something powerful. The teaser focused on a broken Katniss after the Games and on her as a growing symbol. In this one, I want her to be stronger, to be the one who chose to be the Mockingjay.

I think we’ll see her talk to the people in a propo, and probably some archery scene, fighting or training. Maybe hunting with Gale. I also think we’ll see Peeta, with Snow behind the scenes or in propaganda. I’d sure love to get the “You, in 13, dead by morning” line, reminding audiences that Snow isn’t done with Katniss, he’ll do all he can to get her killed.

A scene with Prim could make its way in, perhaps when Katniss is weighing in whether she will be the Mockingjay and at what cost. A glimpse at Finnick and other characters such as Johanna and Annie would also please me.