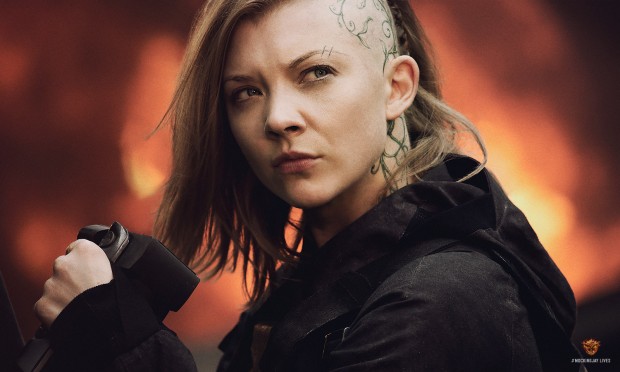 In Issue 2 of TheHungerGamesExclusive.com, Natalie Dormer did a Q&A, answering questions about her work on The Hunger Games: Mockingjay. Read the transcript below:

So, how does it feel to shed those Game of Thrones brocade gowns and get physical?

I’m enjoying it. I’ve been a frustrated actress in wanting to get some action under my belt for a long time. Hence, the blood and dirt across my face right now. As a woman, it’s refreshing that I don’t have to look beautiful and perfect in a role.

You’re part of a cadre of kick-ass female leaders in Mockingjay too.

It’s just fantastic. The beauty of this film is the gender equality and really, that’s modern Western life. Of course, all movies should reflect that. How wonderful that the biggest franchise in American cinema at the moment does have these wonderful strong female leads? It’s long overdue.

So tell us about Cressida.

Cressida is really interesting because she comes from the Capitol. She’s made the conscious decision to go underground to District 13 and join the revolution. Cressida is incredibly talented and gifted at what she does as a female filmmaker.

Why did she deflect from such a plush life in the Capitol?

Evan and Wes and Eldon–who make up my film crew–and myself sat down one evening and had this conversation about why we left. As an actor, you find your own motivation. Maybe something happened to a member of your family because of the repressive government or you got on the wrong side of Snow? Unfortunately, a government turning on its populus is all too common a thing.

As the director of these propaganda ads, she almost provokes Katniss into becoming the Mockingjay, right?

It’s interesting because Cressida has a job to do and she’s a professional. We all know how important public relations are in this modern world. Being a director, Cressida knows how an image will sell and is interested in the iconography of creating the Mockingjay. She almost doesn’t care if Katniss is invested in her heart or not–as long as she can deliver the package.

You’re from the U.K. Why do you think these films have such a profound global impact?

They cross so many themes. There’s the personal love story and the conflcit in Katniss between Gale and Peeta. And obviously, there are these big political themes. Then, you have these fantastic action sequences where people have to make really tough decisions about self-sacrifice or identity. It doesn’t matter where you come from–this is human DNA at its most basic level.

What speaks to you personally?

What the Mockingjay stands for because it shows that people can find a way to galvanize human hope and fight repression.

Yes, they shave my head daily. My tattoo is a transfer, so it needs to be applied every day too.

Finish this sentence: The first time they shaved my head, I…

Ha. I had already grieved and let it go. Beforehand, I sat and had glasses of wine and talked to my friends about it. When it actually happened in the trailer, I was ready. And the book says she has a shaved head, not that she’s entirely bald.

It works with your military issue District 13 uniform too.

The costume has a punk edge, right? As a London girl, I see that [costume designers] Kurt and Bart are influenced by Brit designers like Alexander McQueen and Vivienne Westwood. The tailoring is very interesting, but the costume is very practical too. It has to be comfortable because we’re running around in blood and mud and water.

This role is incredibly physical. How did you train for all the action?

I recently ran the London marathon so all that training increased my stamina and my core strength. So, I found that just by following my marathon program–and adding a little yoga to stretch out the hunched shoulders and keep flexible–was enough to stay strong. But now, in Paris, there is cheese and gorgeous chocolate and everything naughtiness around.

So many of the cast members have been in it for the long haul. How was your first day on the set?

Messalla and Castor and Pollux and Cressida are the outsiders who are just dumped on Katniss and Gale. So life completely imitated art and vice-versa. it may sound indulgent, but it was like, ‘Use it, darlig. Use it.’ We were all very polite with each other at the beginning and six months later, you’re together in water up to your necks at 2:00 in the morning. You bond.

With Mockingjay and Game of Thrones, you’re in two projects that started as beloved books with huge fan bases. How does that feel?

It’s a gift because the quality is first and foremost in the writing–and that is why it speaks to so many people. In Mockingjay, there’s tremendous depth and texture that is given by people at the top of their game, whether you’re talking direction or stunts or art design or make-up or CGI. Such a layering of talent and then, there’s the incredible ensemble cast as well.

One part that’s of particular interest is her mention of a scene in which they’re all in water up to their necks. A sewer scene, perhaps?