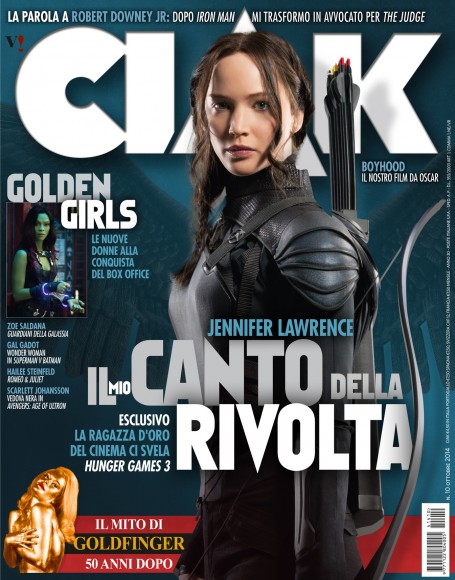 From our friends at THG_Ita and Panem Propaganda we have an October issue of Ciak, an Italian entertainment magazine, highlighting one of Jennifer Lawrence’s first interviews for  Mockingjay: Part 1. The cover features Katniss in her Mockingjay armor, as regal and battle-ready as ever, with the heading “MIO CANTO DELLA RIOVLTA,” which translates to “My Song of Rebellion.”

All The Hunger Games fan-sponges won’t have much new information to soak up from this interview. But I take it as a sign, like the leaves turning for Fall. We can take that deep crisp breath and know it’s Mockingjay Season.

Check out the full interview here where you can chew up the meat and spit out the “Winter’s Bone” if you will. Or see the sample below.

In every movie of the series there is a favourite scene, one that is more unforgettable than the others. What’s your favourite scene in Mockingjay Part 1 and 2?
I’d say all the scenes with Julianne Moore, who plays President Alma Coin. She and Katniss are two strong and determined women. They have a similar vision of the world, but their ideas about the way to change it are completely different. Katniss is, with no self-consciousness, a threat to President Coin. I think that their relationship is very interesting and intense.

How did you train to be ready for these two movies?

Truth to be told, in the first part of Mockingjay, Katniss doesn’t have to go back to the Hunger Games, so she didn’t have a lot of stunts or fight scenes. Katniss has to adjust to life in District 13. She isn’t looking very good, and isn’t very healthy or strong. The first chapter will focus on my character more emotionally than physically.

And in Mockingjay – Part 2?

That’s another story! It will be an action movie, because it’s focused on the final war. There are a lot more stunts, violence, fights and gunshots. We shot it back-to-back with the first part, even though it will come out next year (on November, 20, 2015) but I had the time to train between shoots.

Was anyone else surprised to hear Jennifer say her favorite scenes were with President Alma Coin? So intriguing. Let’s hear your thoughts.