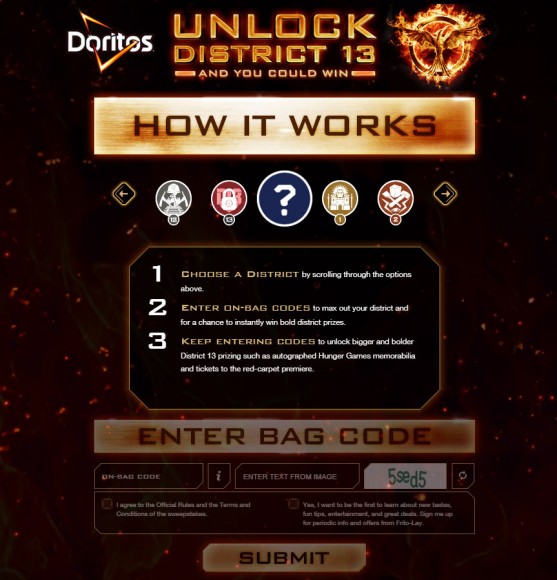 We reported yesterday that Doritos was going to be partnering with Lionsgate to bring fans UnlockDistrict13.com and today the website has been unlocked. Fans can now enter on-bag codes from Doritos to enter to win prizes specific to the 12 Districts of Panem. After a certain point, District 13 will be unlocked and a trip to the LA premiere will be available as a grand prize.

We have to admit, upon first glance we were leery at the promotion, since after last year’s Subway promotion we were all suspicious of any marketing campaign involving food. However, after looking at the themed prizes available and remembering that Jennifer Lawrence herself has a Doritos addiction, this promotion does seem much more reasonable than we initially anticipated. Sadly, it’s only open to the United States.

And just to note, thanks to Doritos, we can now see that the LA premiere will very likely be on November 17!

Another cool thing to note is that the background for each district is themed to their industry: 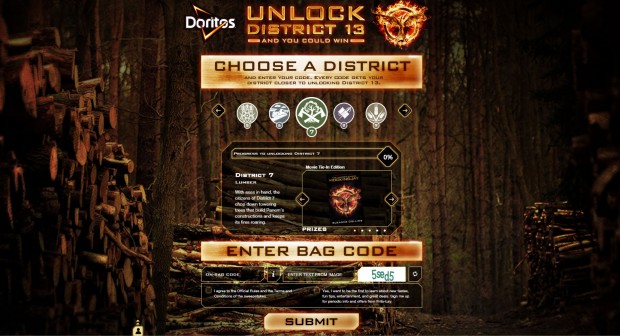 A 40-year-old mom to three living in Honolulu, Hawaii, Crystal Watanabe is a full-time freelance fiction editor.
@pikko
Previous Doritos and Lionsgate to Present UnlockDistrict13.com
Next POLL: What Do You Think About Kanye West Possibly Being on the ‘Mockingjay’ Soundtrack?