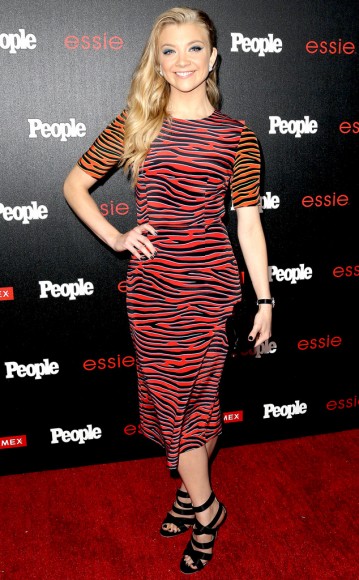 While attending the launch of Extremely Piaget and it’s opening on Rodeo Drive, Natalie Dormer talked to E! about the looming November 21st release of The Hunger Games: Mockingjay Part 1:

“Are you ready for November the 21st, man? I’m telling you. I’m so happy and proud to be apart of this franchise, these incredible movies. I’ve seen the movie. I think it’s fantastic. I’ve seen it, I’ve seen it! Go to the cinema, it’s good. It’s really interesting to watch Katniss Everdeen and the new- we’ve come out of the arena, we’ve all grown up in Mockingjay. It’s themes and a war that involves the whole population: it’s serious. It’s really serious now. And it’s great for me to have played a character that is right by Katniss’ side trying to support her and watch her deal with the stress of the situation and of being an icon. Trying to be an icon. It’s great.”

Natalie also talked about her hair slowly growing back now, “I’m a bit fluffy,” and the process of creating Cressida every morning:

“They shaved my head every day, a clean shave. It was cold. I don’t know if you guys remember the winter just gone, but it was cold! Those polar vortexes! I was wearing my beanie a lot. And they would do this amazing stenciled transfer. The amazing make-up designer, Ve Neill, applied this beautiful tattoo to my neck and head every morning. Which is not always what you want to happen to you at 5 a.m., but it looked super cool.”

Unfortunately off set Dormer never got to rock the look as much as she would have liked to:

You can see a video of the interview over at E! Thanks to DWTC for the hint!