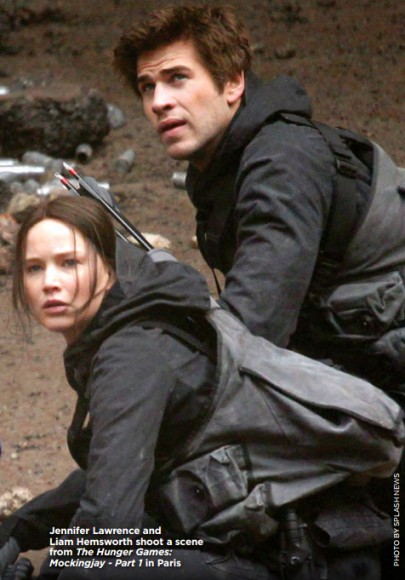 The October issue of Cineplex Magazine is their Holiday Movie Preview, and of course such an issue could not leave out The Hunger Games: Mockingjay Part 1, which is widely expected to become one of the biggest movies of the season, or even the year. The issue includes a 3-page interview with Liam Hemsworth about Gale’s role in this upcoming movie, as well as what it was to film the two Mockingjays back to back and on location.

How does Gale become more important in Mockingjay?

“The first two films Gale basically has to watch Katniss go into these games, and watch Peeta go into the games, and is kind of helpless from doing anything. And now in Mockingjay – Part 1 we pick up in District 13, which was bombed years earlier and now has a secret underground base. Gale is a big part of the uprising and the rebellion, and someone who’s had enough of all the abuse and is ready to stop at nothing to take down the Capitol.”

They chose to shoot many of the Capitol scenes in Paris and Berlin rather than, say, somewhere in the States. What did that add to the look and feel of the films?

“Well, we shot in various locations outside of Berlin which were broken down war posts and things like that, and then in Paris there were various buildings that we shot at, some very interesting architecture that will be seen in the film. The specific building in Paris that we shot in and around had a very heavy vibe about it, lots of concrete.”

It must have felt very strange shooting [in old war posts in Berlin].

“It did, yeah. We also shot in a place called Tempelhof [Berlin’s main airport from the 1920s until 2008, when it was shut down and repurposed as an event space and park]. It was Hitler’s military air base at the time, and is the fourth-largest structure in the world. It had a very,very heavy energy and we shot some quite emotional scenes there with a lot of extras. . .. There was quite a different energy on set shooting in places like that because it had so much history behind it already and then we’re shooting very depressing scenes.”

One important thing to notice is that when asked which scenes were shot there, Liam confirms that Tempelhof was the location for the Nut scenes, and added that he believes “that it’s in the second part [next year’s Mockingjay – Part 2].” So as many of us already believed, the District 2 scenes (or at least the fighting at the Nut) won’t be in Part 1, giving us even more hints as to where the split might be. (Note that the pictures included above and below, taken from the magazine, are actually from Part 2 as well, despite their captions). 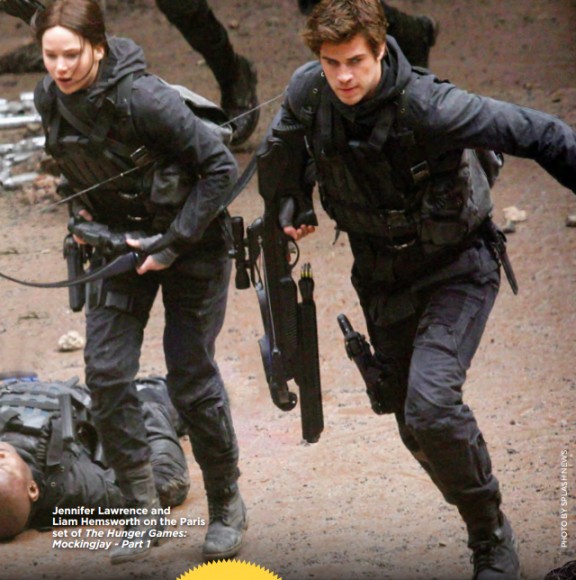 At the end of the interview he mentions future projects (By Way of Helena, with Woody Harrelson), and says that the thing he will remember the most from his Hunger Games experience will be “probably Jennifer’s face ’cause that’s what I was looking at most of the time.” Can’t say that’s a bad thing! 😉

The issue also includes a mention of The Hunger Games: Mockingjay Part 1 in spot #2 in Cineplex’s top 10 holiday movies (only behind Christopher Nolan’s Interstellar). To see the whole issue, including the full interview with Liam, you can head to Cineplex’s website and grab the PDF.

It’s good to see the cast starting to open up a bit more about the film now that we’re almost a month away from opening day. What do you think of Liam’s comments? Sound off below and give us your input.

Thanks to Panem Propaganda for the tip!

Carla Pinilla is a 34-year-old Chemical Engineer from Panama city, Panama. A consummate fangirl, she spends her time reading, writing (mainly fanfiction), or watching way too many TV shows.
@https://twitter.com/girls_are_weird
Previous Lorde Contacted ‘Mockingjay’ Soundtrack Artists by “DM, or a Selfie on Instagram”
Next Interview With Fan Audio Drama ‘The Katniss Chronicles’