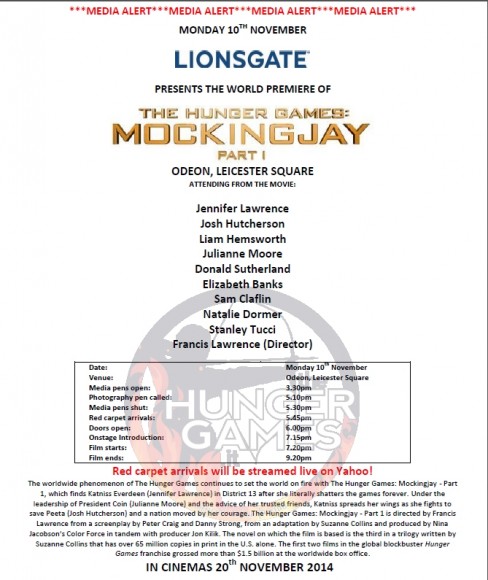 The folks over at Italian fansite TheHungerGames.it have gotten hold of a media program for the Hunger Games: Mockingjay Part 1 world premiere in London, and the document gives out many details of the event. Most importantly for those of us who aren’t lucky enough to be in or near London, the pamphlet confirms that the red carpet will be streamed live via Yahoo!, much like the ones for The Hunger Games and Catching Fire were.

The document also reiterates the assistance of many members of the cast, as well as director Francis Lawrence, and states that red carpet guests are expected to arrive from 5:45 pm BT on. The movie is expected to start at 7:20 pm BT, and should run until 9:20 pm BT. This gives us an approximate run time of two hours, which similar to the rumored one which has been floating around the internet for the last couple of weeks.

The London premiere will take place on Monday, November 10th, at the Odeon in Leicester Square. If you’re in the UK, will you be there? And for the fans all over the world, will you be watching the livestream? Comment and tell us!