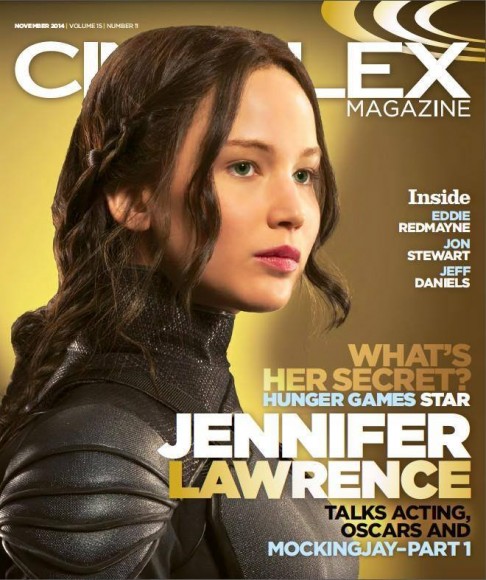 Cineplex Magazine has been very good to us Hunger Games fans recently: first they brought us an interview with Liam Hemsworth last month, and now in their November issue they included a three-page feature in which our lead actress Jennifer Lawrence talks about her life as an actress and of course, The Hunger Games: Mockingjay Part 1.

After a cute little anecdote of the first time she ever “acted,” Jennifer reveals among other things that in her portrayal of Katniss, she always finds herself channeling men, and that the only feminine part of Katniss is herself, “and I felt like that was enough because I’m not very feminine anyway.” About the movie itself, she explains Katniss’ state of mind as we go into Mockingjay Part 1:

“Katniss wakes up in District 13, a District that she didn’t know existed, and her entire home is gone, Peeta is gone,” explains Lawrence. “So she really has to kind of rebuild herself from scratch. She’s had a nervous breakdown from everything that’s happened in the two back-to-back games, and losing Peeta.”

She also commented on the end of filming (“On the last night we all laid and held each other like puppies”), and most importantly for us, she actually comments on the split between the two Mockingjay films, although what she has to say is in equal parts reassuring and… terrifying?

“Oh God, I don’t want to tell you that,” says Lawrence. “It’s a really great ending, and you guys are going to be pissed.”

Oh well, I think we were all already mentally preparing for the worst cliffhanger in history, right…?

The rest of the interview is more focused on her acting career, her work with David O. Russell (including the soon-to-start-production Joy), and how she voted in the past few Academy Awards (including the one time she unknowingly voted for herself). You can read the full article over at Cineplex’s website, or you can download the PDF version if that’s better for you.

What do you think of Jennifer’s comments here? Does this cement a specific split point in your mind? Sound off in the comments!