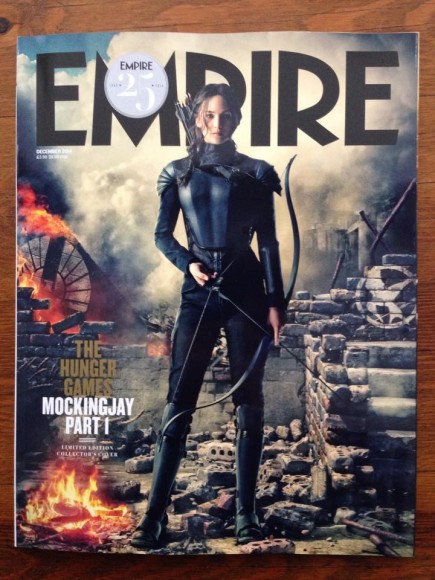 Many fans have been more than a little frustrated that we have seen so little of The Hunger Games: Mockingjay Part 1 in the world’s major film/entertainment print publications (Entertainment Weekly, we’re looking at you), and personally the staff at Jabberjays.net was a little frustrated that the cover for the November issue of Empire Magazine featured Interstellar rather than Mockingjay.

However, Empire has responded to our disappointment with a vengeance, as their December issue was just revealed to have not only a Mockingjay-themed cover, but an amazingly EPIC Mockingjay cover at that, as well as a HUGE accompanying article (at least 8 pages!) chock-full of brand new stills from the movie.

Hopefully we’ll see a full preview for the issue on Empire’s website soon, but for the moment we have a glimpse at it thanks to @JogosVorazesBRA, @_chrissieee (via QuarterQuell.org), @chloesibardgas1 and our very own Jabberjay Luan.

UPDATE: Empire has released HQ images of both the general cover and the subscribers’ cover for this issue. Check them out below! According to the magazine, “everyone from old hands Jennifer Lawrence to franchise newcomers Julianne Moore (playing President Alma Coin) talk about what to expect from the first half of the final chapter of the immensely popular post-apocalyptic series, and how the story has been tweaked to accommodate all that plot.”

We’ll be sure to post more about the article itself, as well as better-quality versions of the new stills, when they hit the web, so stay tuned! Man, we can’t WAIT to get our hands on this issue. Isn’t it awesome?! Be sure to tell us in a comment what you think of it!

Carla Pinilla is a 34-year-old Chemical Engineer from Panama city, Panama. A consummate fangirl, she spends her time reading, writing (mainly fanfiction), or watching way too many TV shows.
@https://twitter.com/girls_are_weird
Previous GIVEAWAY: Countdown to the Rebellion Day 27 – Mockingjay Glassware
Next Charli XCX on Lorde Contacting Her via Instagram for the Mockingjay Soundtrack