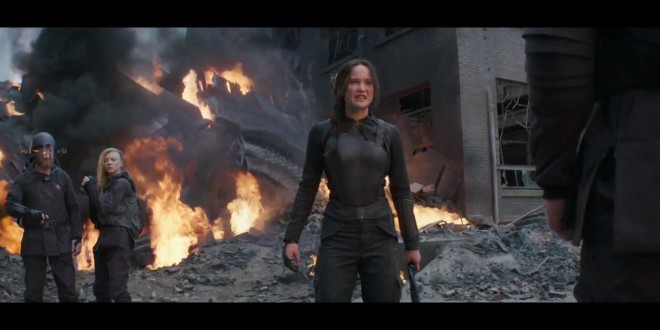 According to a press release from Fandango, The Hunger Games: Mockingjay Part 1 has broken the ticket retailer’s 2014 record for first day pre-orders! Tickets can be purchased HERE.

Starting Today, Fandango Fans Buying Advance “Mockingjay” Tickets Will Have the Chance to Win a 2015 Mazda3

Starting today at  www.Fandango.com/HungerGames, fans who buy tickets to “Mockingjay will be automatically entered for a chance to win a four-door 2015 Mazda3. The sweepstakes ends on December 12 at 8:59 am PT.  See official rules on Fandango for prize details, approximate retail values and free alternate means of sweepstakes entry atwww.fandangomockingjaysweeps.com.

“The Hunger Games: Mockingjay – Part 1” was voted by Fandango fans as the most anticipated movie of 2014. To celebrate the advance-tickets-on-sale window, Fandango is launching “’The Hunger Games’ Guide” destination at www.Fandango.com/HungerGames, featuring exclusive “Mockingjay” movie trailers and clips with Jennifer Lawrence, plus fun film facts, movie trailers, fan polls, new “Mockingjay” gift cards, the Ultimate Katniss Mash-Up, and “The Hunger Games” Character Guide for the uninitiated.

Fandango, the nation’s leading moviegoer destination, sells tickets to more than 25,000 screens nationwide. Fandango entertains and informs consumers with reviews, commentary, celebrity interviews and trailers, and offers the ability to quickly select a film, plan where and when to see it, and conveniently buy tickets in advance. For many theaters, fans can print their tickets at home or receive them as a paperless Mobile Ticket on their smartphones. Fandango’s top-ranking movie ticketing apps, with more than 44 million downloads, are available on the iPhone and iPad, Android, and many other platforms.  Fandango is enjoyed by more than 30 million online and mobile visitors each month, according to comScore.  Film fans also find Fandango on Facebook at www.facebook.com/fandango and on Twitter @Fandango.

About “The Hunger Games: Mockingjay – Part 1”

The worldwide phenomenon of The Hunger Games continues to set the world on fire with The Hunger Games: Mockingjay – Part 1, which finds Katniss Everdeen (Jennifer Lawrence) in District 13 after she literally shatters the games forever. Under the leadership of President Coin (Julianne Moore) and the advice of her trusted friends, Katniss spreads her wings as she fights to save Peeta (Josh Hutcherson) and a nation moved by her courage. The Hunger Games: Mockingjay – Part 1 is directed by Francis Lawrence from a screenplay by Danny Strong and Peter Craig and produced by Nina Jacobson’s Color Force in tandem with producer Jon Kilik. The novel on which the film is based is the third in a trilogy written by Suzanne Collins that has over 65 million copies in print in the U.S. alone.

About Mazda North American Operations and the 2015 Mazda3

Mazda North American Operations is headquartered in Irvine, Calif. and oversees the sales, marketing, parts and customer service support of Mazda vehicles in the United States and Mexico through more than 700 dealers. Operations in Mexico are managed by Mazda Motor de Mexico in Mexico City.

The 2015 Mazda3 is built from the ground up with the award-winning SKYACTIV® technologies and wrapped in a stunning cloak of KODO design. The overall package touts best-in-class fuel economy with 41 highway mpg and keeps its occupants safe through the available i-ACTIVSENSE suite of safety technology. The 2015 Mazda3, available in four-door and five-door models, is offered in four trim levels – SV (sedan only), Sport, Touring and Grand Touring. On sale now, pricing starts at less than$17,000 MSRP for sedans and less than $19,000 MSRP for five-door configurations.