Natalie Dormer Talks Getting Her Role As Cressida with Flare Magazine 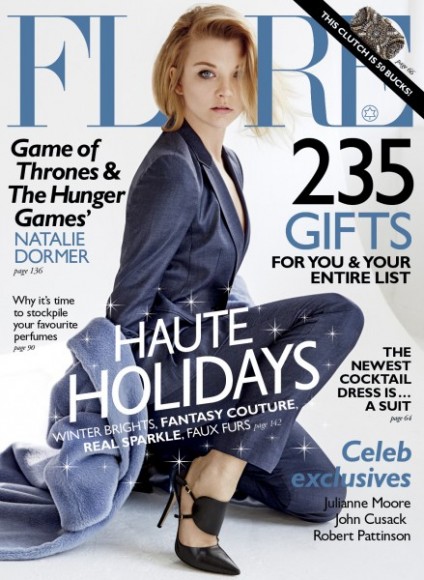 Natalie Dormer is on the cover of Canadian fashion magazine Flare and spoke with them about her various anti-hero characters on Game of Thrones and Elementary and also mentioned where she was when she found out she’d been offered the role of Cressida in The Hunger Games: Mockingjay 1 and 2.

Dormer was in Paris, having dinner with friends, when she got the call offering her the role inMockingjay—and asking if she’d be willing to cut off all her hair. “I had a bit of a—[gulp]—moment,” she says, but she reconciled herself to going bald. Francis Lawrence later suggested an undercut befitting of a rebel punk from Panem’s fashion-forward Capitol; Dormer cites Brazilian model Alice Dellal, who’s been rocking a half-shaved look for years, as an inspiration.

Of course, becoming Cressida took more than a haircut. “It’s really interesting because you have somebody like Jennifer Lawrence, who isn’t classically trained at all and who works entirely from her gut and her instincts, and seemingly almost doesn’t prepare; she just sort of goes with it and feels it in the moment,” says Francis Lawrence. “And then you have people like Natalie, who has really, really thought about the details and goes off between takes and you see her running things through her head. She likes to talk about it a little bit more, likes to have more information up front.”

To read the full interview with Natalie, head over to Flare.com.