It was recently announced that The Hunger Games: Mockingjay Part 1 will get four premieres in Australia prior to its official release date, November 20th. A screening will take place in each of Australia’s major cities. On November 14th, the film will show in Sydney and Melbourne, while it will show in Brisbane on November 18th, and Perth, November 19th.

Because of scheduling conflicts with other commitments, none of the cast or crew from Mockingjay will be in attendance, though local Australian celebrities will be. That’s pretty much all we know at the moment, but I’ll be sure to update if I find out anything else. 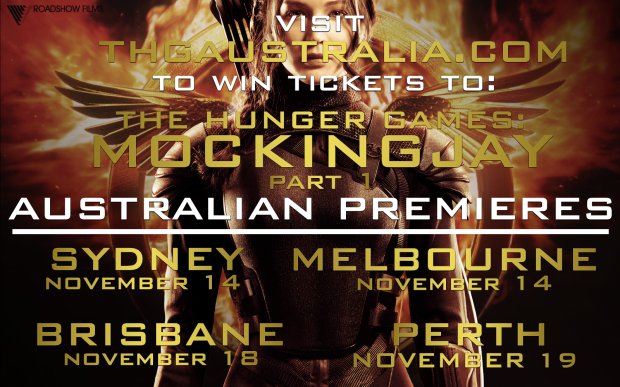 THGAustralia are giving away two double passes to lucky fans in each of the four cities. If you live in Australia and are close by to any of these cities, make sure you check out this giveaway. Australia rarely gets any cool events as we’re so far away – take advantage of this!

At 20-years-old, Hannah just graduated from university with a Bachelor of Fine Arts with a major in Creative and Professional Writing and a minor in Entertainment. Loves puns, sleeping, film and TV, books, her husky and musical theatre.
Previous Jennifer, Josh, and Liam to Appear on ‘Good Morning Britain’
Next Natalie Dormer and Sam Claflin Answer Fans’ Questions On Twitter