New Mockingjay Clip from GMA with Katniss, Peeta And Gale 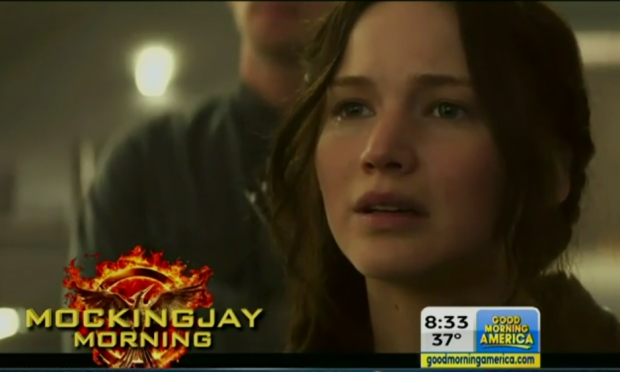 Today the three amigos, Jennifer, Josh and Liam, appeared on Good Morning America to jabber a little more about Mockingjay Part I and to introduce a new clip, which portrays a huge character conflict between all three of them. Under the tortuous hands of the Capital, Peeta is breaking down saying, “Ask yourself. Can you trust the people you’re working with?” Katniss’s insides have been melted by her sympathy and worry for Peeta. She asks Gale, “Did you see what he looked like?” Gale wastes no time in saying, “I saw a coward.”

How we are going to keep from screaming at the screen throughout the entire movie, I don’t know. I mean, Katniss may seem to be stuck in the middle, but as fans, we are stuck between all three!

Thanks to Mockingday for posting the full clip here.

My name is Jared Sharpe, and it's a privilege to write for Jabberjays.net. I'm from Vidalia Georgia - I'm 25 - I have an identical twin brother, Jackson, who also writes for the site because apparently twins do the same things - I double majored in Writing & Linguistics and Spanish - I sing, play piano, work out, and I'm a Site Coordinator of a 21st CCLC after school program. I like to create, and this is an awesome outlet. The Hunger Games trilogy inspires and captures my imagination, so I'm here to explore the world of THG books and movies with all of y'all.
Previous Samsung Releases Behind the Scenes Video From ‘The Hunger Games: Mockingjay Part 1’
Next VIDEO: Brand New Mockingjay Part 1 TV Spot ‘Caesar’

Several major US theater chains such as Cinemark and AMC Theatres have taken to social media to promote their Mockingjay double feature on November 18th with a 30-second preview for the event.