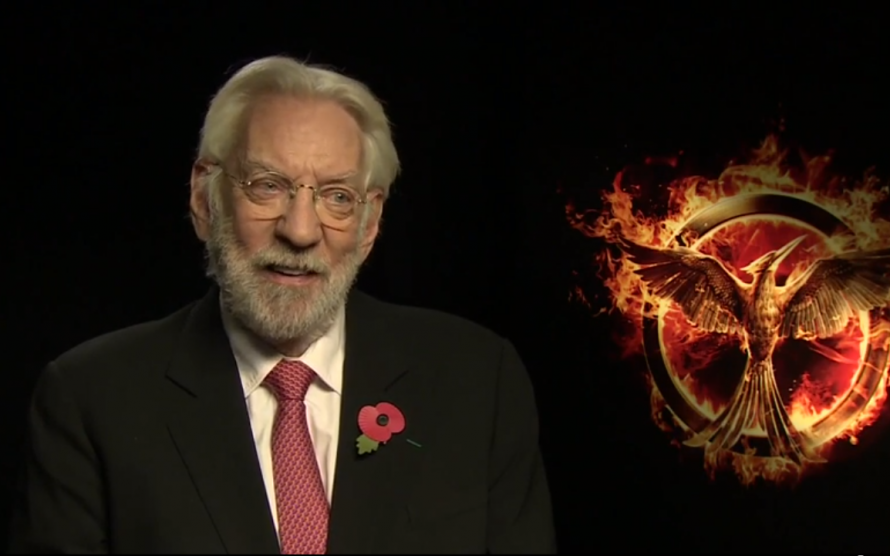 Donald Sutherland sits down with Hit Fix to talk about the deleted President Snow and Peeta scenes, which were so prevalent in the Mockingjay adversiting campaign. Because Mockingjay was so loyal to the perspective of Katniss, many of the scenes would have been breaking away from Katniss’ point of view. “I love the scene with Peeta,” Donald says, “it just didn’t fit with their paradigm.”

Donald does paraphrase the cut dialogue for us-

Peeta “So you’re asking me to say all these things?”
President Snow “You have everything right except one detail. I’m not asking.”

Commenting on the complexity of Snow’s character, Donald says, “He doesn’t kill people unless it’s absolutely essential, but he does kill people when it’s essential.”

Donald sees Mockingjay Part 1, and the entire Hunger Games series, as a platform to get young people involved in changing our world for the better, especially in the United States. He admires Germany for the 30% of their energy that comes from the sun and wind, and he is passionate about the injustice of lobbyists raising the costs of cancer drugs in the US, which when compared with other countries costs 80% more. “Shareholders in drug companies are living off the misery of poor people.” Donald says.

It’s wonderful to see Donald Sutherland’s heart for young people in this world when he spends most of his screen time trying to get them to fight to the death as President Snow. It’s a healthy irony . Be sure to check out the entire interview below.