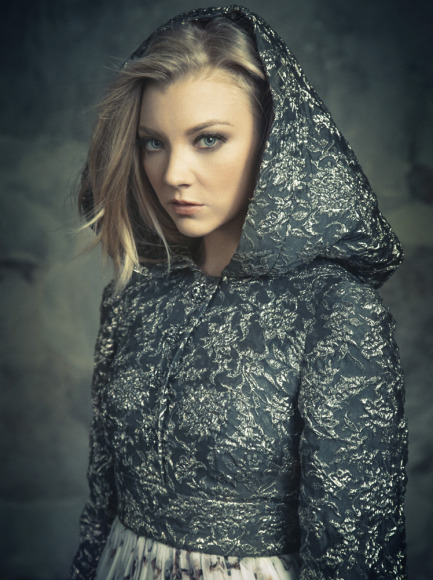 An interview with Natalie Dormer was released this week in the New York Post, in which she talks a little about Cressida, her look, and what led her to taking the role in the first place despite having to shave her head to attain that look.

Dormer, 32, did what she always does: She convened her friends. “We went round the dinner table, and the opinion was unanimous,” she says by phone from Los Angeles. “You’d have to be an idiot to say no to ‘Hunger Games.’ And hair grows back.”

In the end director Francis Lawrence decided Cressida would sport only half her head shaved, and Natalie admits she grew fond of it:

“It was liberating, actually,” Dormer says now. “It’s interesting how much we women perceive that our sense of attractiveness or physical allure is to do with our hair.” She laughs.

“Though it was chilly — there were too many polar vortexes this past winter for my liking. And it does feel peculiar when you lie on one side, then roll over.”

She goes on to talk about other roles she has played, noting that many of them are sexually-empowered women.

“I have been blessed to play women who are sexually competent. They know how to use it,” Dormer says. “Margaery Tyrell is a Kate Middleton/Michelle Obama hybrid, a first lady/princess, trying to win over hearts and minds. The Princess Di effect, you may call it. And Anne Boleyn had to use the tools women had back then. So it will be interesting to see what people think of Cressida. She looks cool, but she’s not a woman who’s defined by a romance or a man.”

She doesn’t consider herself as someone who has to rely on her sensuality (“When I wake up on a Sunday morning with a slight hangover, in the gym with no makeup on, that’s who Natalie Dormer really is”), and she wishes she could get a job where she could just “wear regular clothes, and need only a half-hour in the makeup trailer.”

The lengthy interview goes on to describe her typical style and the physical exercise she loves, and then talks some about her career and where she wants to take it (“I always want to be a human first and an actress second”). She’s also very complimentary to our leading lady, Jennifer Lawrence:

“She’s everything that people perceive her to be — grounded, down to earth, with a buoyant energy and a fantastic sense of humor.”

The article is also accompanied by the most gorgeous photo spread (seriously, I was having a hard time reading because I couldn’t tear my eyes off these pictures), which you can see below.

What do you think of Natalie’s comments here? Sound off below!

Carla Pinilla is a 34-year-old Chemical Engineer from Panama city, Panama. A consummate fangirl, she spends her time reading, writing (mainly fanfiction), or watching way too many TV shows.
@https://twitter.com/girls_are_weird
Previous VIDEO: Extended ‘Mockingjay’ Clip of Gale and the Camera Crew in District 12
Next Jeffrey Wright on the End of ‘Mockingjay’ Filming: “It was Bittersweet”