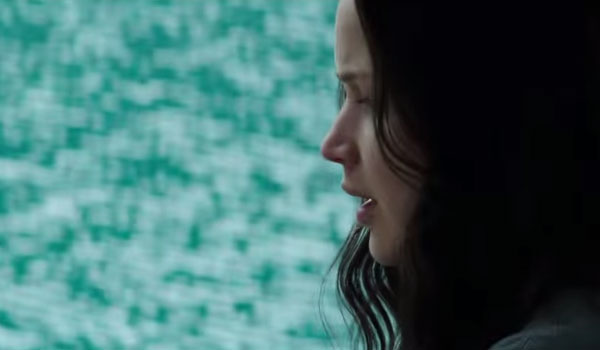 Tributes have been watching joyfully as Jennifer Lawrence’s version of ‘The Hanging Tree’ steadily climbs charts all over the world, making its debut on the Billboard Hot 100 yesterday at #12. The song has been immensely more popular than the heavily marketed ‘Yellow Flicker Beat’ by Lorde, whose curated soundtrack features a variety of songs and artists that give the album an overall Capitol-esque EDM and pop feel.

I’ve admitted to numerous people that Lorde’s soundtrack on its own is a very good collection of catchy songs, something many of the staffers here at Jabberjays can admit to as well. The catch there is that none of us feels that these songs are relevant at all to the dark tone and deeply rooted messages behind the story of Katniss Everdeen in The Hunger Games: Mockingjay Part 1. It hardly matters to us what the lyrics are if the songs themselves don’t reflect how we feel watching the film. It’s like suddenly belting out Party in the USA at a funeral. It’s unfitting, unsettling, and some of us find it downright rude.

And then the movie was released and fans beamed proudly over Jennifer Lawrence’s performance singing in the quarry next to the lake. She’d been telling everyone who would listen how much she hated it, while director Francis Lawrence rained down praise about how that was his favorite scene to shoot, despite how mad Jennifer was at him at the end of the day. Fans felt good about it. Touched. Proud.

Then today we found out that Republic Records has released a radio remix of The Hanging Tree–confirmed by various sources to be playing on the radio–that takes everything pure and good about the song and turns it into a crudely mutated version of what fans have proven they love in the form of an excess of 200,000 downloads of the song in its first week alone.

Admittedly, were the source material any different and played independently of The Hunger Games, we here at Jabberjays.net would probably embrace the song’s catchiness, but since this is like taking Rue and creating a snarling, clawed monster out of her remains, we refuse to stand behind it.

I’ll be blunt here: I’m angry. The Hunger Games series may be aimed at young adults, but its popularity among book fans of all ages has had absolutely nothing to do with sick beats and catchy tunes. This just serves as a reminder of the bitter irony that a fictional character such as Katniss Everdeen, who escaped the Capitol in the books, will be transformed, commercialized, and paraded around in our modern society–the real Capitol–for years and years to come.

She really will never get off this train.

Be sure to let us know your own thoughts in the comments.

A 40-year-old mom to three living in Honolulu, Hawaii, Crystal Watanabe is a full-time freelance fiction editor.
@pikko
Previous Katniss is No. 7 on TIME’s List of 15 Most Influential Fictional Characters of 2014
Next Robert Knepper Got Antonius Role Through Neighbor Philip Messina