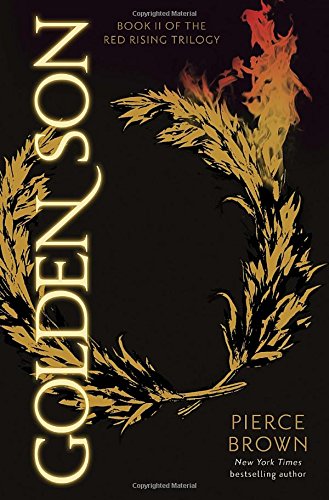 Last year, I read Pierce Brown’s Red Rising, which touted likenesses to Katniss Everdeen and Ender Wiggin, my two all-time favorite characters in books. In the end, Darrow didn’t quite measure up to those standards, but I still loved the book. Despite a shaky beginning, Red Rising rose up and demanded my attention, becoming much more than I’d originally expected. You can read my review of the book here. Just to note: Red Rising was my gift of choice for many of my family and friends. I gifted out five copies last month for Christmas.

Last month I received the sequel, titled Golden Son. With a busy month ahead, I knew that I couldn’t pick up the book without a good amount of time to sink into it. Once you get into the meat of Brown’s books, there’s almost no hope of getting anything else done. Eventually, the urge overtook me and I picked it up anyway. Yesterday, Golden Son was released for all the world to helldive into.

Golden Son picks up two years after the events of Red Rising, and we see Darrow au Andromedus in a faraway star system in the Academy, training aboard his own starship for space warfare. And yet, the Academy is only a sliver of time in Darrow’s story in Book 2. All the characters you came to know and love (or hate) return, along with a couple of new ones, including dangerous new villains such as Cassius au Bellona’s brother Karnus and, of course, Augustus, the man who set Darrow upon his path in the first place, who we only briefly met at the end of Book 1.

We quickly find that despite his meteoric rise from his victory at the Institute, Darrow has not heard from the Sons of Ares in the years since, something that I found surprising and intriguing at the same time. Darrow must continue on his path in the best and only way he knows how. And yet, you have to wonder if this was still possible with Darrow living amongst the Golds for so long. Would he still be able to do what he set out to do after living the high life? After making friends like Sevro, Roque, Mustang, and Victra?

As with the first book, Golden Son rockets you along at a breakneck pace, packing in so many events and so many complicated relationships that its comparison to Game of Thrones is a fair assessment. The story gives readers a satisfactory inside look at Gold society, something that we only got a little peek of in Red Rising, and that was through the naive eyes of a newly risen Darrow. In this book, Darrow’s reach expands exponentially, and you find yourself traveling around the galaxy with him in an astonishingly action-packed storyline.

One of the few flaws that I found in the book is repetitiveness. Brown sometimes starts to fall into what I call the Dan Brown Syndrome (hah, same last name), in which the author gets into some kind of storytelling rut, repeating the same formulaic structure throughout until it becomes noticeable and pulls you a little out of the story. Darrow will encounter a terrible situation, come up with a fantastical solution, be on the edge of true glory, then fall into despairing misforutune. He also makes a few too many references to Eo. And while I understand she’s the inspiration for everything he does and that she’s always in his thoughts, at times it became tiresome and wispy.

But these flaws are forgivable when you get down to the meat of the story. There’s no ignoring that Darrow’s harrowing adventures in this book captivate you and grab you by the arms and never let you go. There’s no forgetting the things that transpire in the pages of Golden Son. There’s no denying that a terrible year of waiting for the next book will begin the second people finish this one.

I don’t want to spoil much more, so I’ll simply end by saying that Golden Son will rock your world, and you gorydamn well better come here and tell me what you thought about the book when you’re done.

Disclaimer: This review is based upon an unproofed advance reviewer copy of Golden Son. I was not paid to review this book and my opinions outlined above are my own.

Review: ‘The Testing’ Will Appeal to Tributes

Review: ‘The Bone Season’ is a Sure-Fire Fantasy Adventure