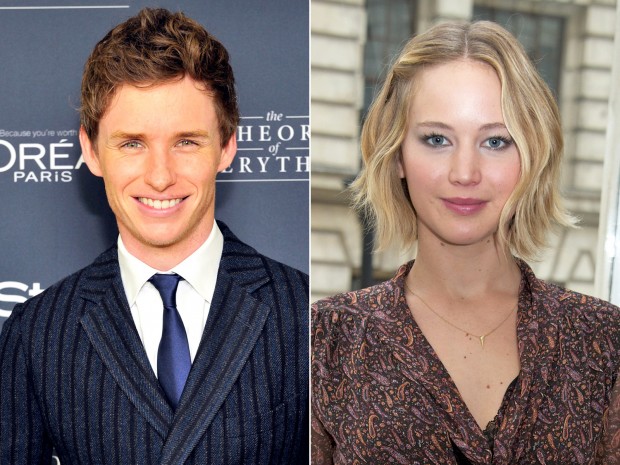 Celebrity-on-celebrity interviews are a “thing” nowadays, and they only got even more awesome with Jennifer Lawrence on board. A couple months ago our leading lady got the chance to interview fellow actor and friend Eddie Redmayne for Interview Magazine’s February cover story.

Eddie has been garnering award after award for his role as Stephen Hawking in The Theory of Everything and is a leading Oscar contender (allow me a personal note here: if you haven’t watched that film, please do so! It is amazing). Jennifer, from her side, has been down that path three times already, so she can definitely relate, and being as candid as she always is, Jen also shared some things about herself in the animated conversation.

The two talked about anything from the way their respective careers got started, to what drives them when they’re filming, to their shared love for reality TV. But most importantly for us, Jennifer talked a little about the end of filming for the Mockingjay movies (reiterating that there’s still one scene left to film “for the end”), and how much she misses her co-stars now that they don’t see each other every day:

LAWRENCE: I hate you, by the way, for getting skinnier on a press tour. I only get fat. Because all I can eat is fast, hotel food.

REDMAYNE: Are you guys finished with Hunger Games now?

LAWRENCE: I think we’re done with the press tour. I’ve got, like, one more thing to shoot for Hunger Games. We just have one scene to do for the end.

REDMAYNE: It’s over? Wowzer. That’s quite intense. That’s, like, several years of your life.

LAWRENCE: I know. I’m not happy about it at all.

LAWRENCE: I know, right? I would totally do it. And now Liam [Hemsworth]’s doing a movie in Australia for two months. It’s the longest that the three of us have ever spent apart.

LAWRENCE: Yeah. We were just on the plane, and Josh [Hutcherson] was eating something that I don’t like—salmon or something. I was eating my own snack and he kept eating my snack. I was going to share with him because I’m not an asshole, but then finally I was like, “I can’t eat your snack. So it’s not fair that you’re eating my snack!” Our security guard just started laughing at us. And we were like, “It’s been a lot of years!” [laughs]

I love hearing her talk about the little funny moments she shared with Liam and Josh– it’s so lovely to know that they truly are really close friends! What do you think?

This is just a snippet, but if you’re a fan of either Eddie or Jennifer (which, let’s face it, of course you are), be sure to visit Interview’s website and read the full article. It’s a fantastic, absolutely hilarious interview!

Carla Pinilla is a 34-year-old Chemical Engineer from Panama city, Panama. A consummate fangirl, she spends her time reading, writing (mainly fanfiction), or watching way too many TV shows.
@https://twitter.com/girls_are_weird
Previous Happy Birthday, Liam Hemsworth!
Next “Tim Palen: Photographs From The Hunger Games” to be Released in June