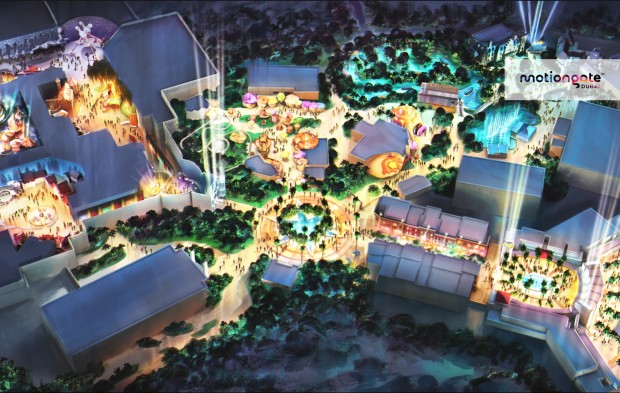 I’m not sure March 31st was the best day to announce this (remember our April Fools Day prank last year?), but as it’s an official press release from Lionsgate, we have to take it seriously as it comes straight from the source. I might withhold my reaction until April 2nd just to be safe, though. 😛

This morning, Lionsgate announced via a press release that they are partnering up with Dubai Parks and Resorts to create a “Lionsgate Zone” in the motiongate Park in Dubai, UAE. This park will include attractions based on the Hunger Games franchise, as well as from other Lionsgate properties such as the Step Up movies.

No details have been released about the attractions themselves, but it’s known that motiongate Park will open in October 2016 and will cover an area of 4 million square feet (nearly the size of Disney World’s Magic Kingdom), expected to host over three million visitors a year. The park aims to “take visitors on an immersive cinematic journey through their favorite films via 27 different latest-in-technology rides and attractions.”

Dubai Parks and Resorts Chief Executive Officer Raed Al Nuaimi said, “We are thrilled to be working with a Hollywood studio whose creative resources, spirit of innovation and vision of the entertainment experience are so closely aligned with our own. Lionsgate’s Hunger Games, Step Up and other signature properties are the perfect centerpiece for one of the most visionary new theme parks in the world. Through this partnership we are offering even more for the whole family to enjoy on their visit and are confident that motiongate™ Dubai will set a global benchmark as the ultimate movie themed destination.”

Looks like our April Fools Day joke is actually coming true, tributes! What do you think of this news? Are you excited for a Hunger Games theme park? What kind of attractions do you think will be in it? Last year we had a lot of people tell us that they’d love the idea of a theme park– are you saving up for your ticket to Dubai yet? Sound off in the comments!

Carla Pinilla is a 34-year-old Chemical Engineer from Panama city, Panama. A consummate fangirl, she spends her time reading, writing (mainly fanfiction), or watching way too many TV shows.
@https://twitter.com/girls_are_weird
Previous VIDEO: ‘Until You Return’ with Katniss and Peeta
Next JabberCast Episode #17 – Remember