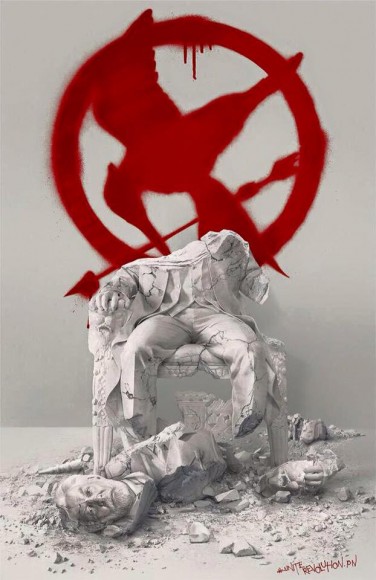 With confirmation that ‘Unite’ is a teaser coming on June 9, it’s time for us to jot down our predictions for what’s going to be in it! Is it going to be a propaganda piece like last year? Or will they go straight to a traditional teaser with movie footage? Read our predictions and then comment and give us your own! Once we see the teaser we can come back and see who was on point and who was on morphling. 😉

I think we’re getting movie footage, and with a name like ‘Unite,’ I think the odds are in our favor to get footage that centers around the new line we heard Katniss cry out in the ‘Remember’ teaser, “Tonight, turn your weapons to the Capitol!” It would mean a war-centric teaser, with the setting being District 2 and perhaps the Capitol. I know I shouldn’t get my hopes up, but I’m really hoping for a glimpse of Commander Lyme (Gwendoline Christie) in this. I’m not sure we’ll get to see Peeta in this one, since Peeta isn’t supposed to come back into the scene until Squad 451 heads to the Capitol.

Just about all of Part 1’s trailers have had titles, so I think that the “Unite” title is just the running theme of their current marketing of the film. That being said, I think that we may see Katniss giving the speech in District 2. I hope that the whole trailer is not centered on that speech, though, because I would love to see the raid on the Capitol. I want to see a lot of Prim, too. I think that they need to get the general audience more on board with the relationship between Katniss and Prim in order for the film’s ending to have a huge emotional impact. I don’t know why, but I kind of want to see Tigris in there as well.

My predictions for what I think we will see and what I want to see are two different things. I’m 100% with Crystal on wanting to see Commander Lyme, even though the whole time I watch her I will be thinking of her as Brienne of Tarth from GoT. Like Zach, I’d love to see at least a flash of Tigris’ face. And I’m dying to see how they do the District 2 scene where Katniss gets shot, so I’d love to see that in there. But that’s enough dreaming.

Like some people have been saying, the title ‘Unite,’ being similar to the titles given to the MJ I trailers, suggests they will continue the theme of mostly using one long clip, but I would rather have a bunch of little nugget shots. I want to see the Star Squad. Talk about a group uniting! Also, by the end of Mockingjay Part I, I felt like President Coin was actually pretty likable, so I think they need to start portraying Coin as someone who doesn’t want to “unite” under the same ideals as Katniss if Katniss is going to…you know. But I’ve learned to expect less from the marketing campaigns, so regardless of what I want, they’ll keep it simple and basic, but I’ll take it!

I predict that this will be a District 13 propo. With a name like “Unite”, it will probably bookend “Unity” from Mockingjay Part 1. I think we’ll see either President Coin calling for the districts to Unite, Katniss in her Mockingjay outfit calling for it, or a combination of both. I don’t think we’ll get to see any movie footage, just a propo used solely for marketing the movie.

“Unite” definitely indicates the Rebels, so I think the trailer will have a bit of a propaganda feel to it, even if it isn’t styled the same way as those from Mockingjay Part 1. I think there will be plenty of action shots and an iconic line from Katniss, showing the continuing fight and the need to unite together for the final assault on the Capitol to bring an end to Snow’s regime. The third book deals a lot with the consequences of war, so the trailers need to depict the ongoing devastation and damage being caused. This includes the emotional as well, so even if Katniss’ relationships with pivotal characters aren’t shown in this first teaser trailer I hope they are in the remaining ones.

I also think there will be a quick glimpse of action in District 2, including a split second look at The Nut’s demise, and fingers crossed a “blink and you’ll miss it” glimpse of Commander Lyme, similar to the first glimpse we had of Commander Paylor. Like Crystal, I don’t think that we will see Peeta (thank god for the still released!) but I do expect we’ll see Katniss in her Mockingjay suit along with other members of Squad 451, perhaps uneasily making their way through some streets.

Either way the wait has been too long, so I’ll be happy with whatever is in it!

I think this teaser can go one of two ways. It can go the route that part 1 went in with its first few teasers being propaganda, or it can go the route of showing actual footage from the movie like how a traditional movie trailer would be. If it goes in the propaganda route, I think rather than it being from the Capitol, I think it would be from the Rebels. Maybe it will have something to do with the newly released Unite poster with the destroyed President Snow statue. The teaser could quite literally be just that… Rebels destroying a statue. If the teaser goes in the route of a normal movie trailer, oh boy I would be a mess. I think there will definitely be a lot of action considering Francis Lawrence had said in the past that this will be a war movie. As we know, a lot of that action in the book includes many deaths of beloved characters… I know if an explosion is included in the trailer, fans will automatically come to the conclusion of……. Well, you know. I literally have no idea what to expect with this upcoming trailer but I am super ecstatic! I am sure anything that is released on Tuesday will make me happy and sad and overly emotional and make me wanna curl up in a ball and shut off the whole world, but I think I’m ready for it (no I’m not).

My prediction is honestly the same as Grant’s when it comes to the Presidential Address attacked by the Rebels. But if it’s the actual footage teaser I think that we will only see a handful of shots and one longer one with a narration of the sequences – like we saw with the OLTM trailer, lots of fades to black that seem to take up more time than the footage itself…

I’m with Luan on this one. I think I’m going to lose my mind if it’s a propaganda thing instead of a real footage teaser. If they’re going to start with propaganda-type stuff, I really wish they would have started with it earlier because IT’S JUNE. That type of stuff should have started by now. And even if it is a teaser with proper footage, I doubt there’s going to be a lot of it. Haha, prove me wrong please, Lionsgate!

Going off last year’s MJ1 marketing campaign, I think we can expect one long clip of something, rather than a bunch of bite size clips. That kind of editing is usually saved for the full length trailer, which we’ll be getting at a later date. ‘Teaser’ is telling, I think, of the type of footage we can expect. Maybe an address hacked by the rebels, so as to not give too much of the actual plot away? Although I’m really hoping to see Peeta, so I hope I’m not right on this one! LG have always taken the ‘Capitol’ approach to their campaigns, so I’m guessing the teaser will definitely be Capitol centric in that it will act as if the Capitol is actually getting attacked. But PLEASE GIVE ME PEETA LIONSGATE.