“Unite” Revolution Billboards Pop Up in Major Cities Around the World 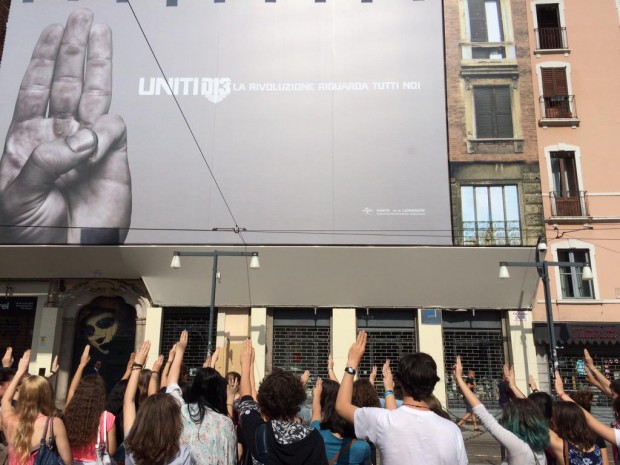 Thanks to our friends at QuarterQuell.org it has come to our attention that several billboards featuring the Hunger Games‘ three-fingered salute and the tagline “UNITE: The revolution is about all of us” have gone up today in at least 25 major cities all over the world.

If you’re lucky enough to live in cities like Milan, Los Angeles, Bogotá, Moscow, Birmingham, Mexico D.F., Paris, Montevideo, Rio de Janeiro, London or even New York City (they couldn’t leave out Times Square), you can now see these billboards somewhere near you.

In the meantime, here are some pictures of the billboards that have already made their way to the internet, as well as a short video of the one in Moscow, Russia, which is electronic:

What do you think of these billboards? Do you think they could mean that something else is coming soon? Maybe something on Revolution.pn? We’re not sure, but for what it’s worth I think they’re pretty cool, and I really really wish there was one in my city so I could stand in front of it and do the salute. If you do get to see them live, make sure to take a picture and send it or tweet it to us! 😀