REVIEW AND EXPERIENCE: The Hunger Games Exhibition (Now Including Video!) 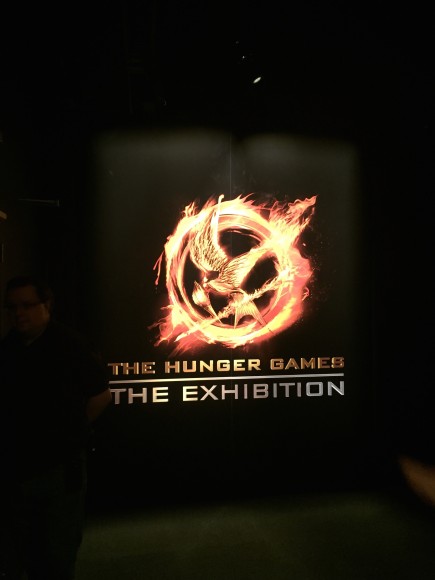 I was lucky enough to have an early preview of The Hunger Games: The Exhibition before the grand opening this Wednesday July 1st, and let me tell you, it is most certainly worth the hype. If you want the exhibition to be a surprise and don’t want to see any pictures, then do not continue reading!

Upon entering the exhibition, I had hardly any idea as to what to expect. I thought I would see some costumes and props and that would be about it. What I totally did not expect was to feel like I was completely immersed into the World of The Hunger Games, and that is just what happened.

Right before entering the exhibition, you take a souvenir photo in front of a green screen and are given an acoustic tour guide iPod touch. These tour guides can help give you more information as to what your looking at and show exclusive content throughout the tour. I found myself not really using it throughout my journey because it seemed too distracting for me, but it looked very cool and could probably make for an enjoyable tour if you’re good at multi-tasking (which I am not :P).

The exhibition is set up much like Katniss’ own journey which makes it feel very immersive. Like her journey, the tour starts off in the Hob of District 12. If you keep your eye peeled, you may be able to find a certain something sticking out more than some of the other stuff…

Following the Hob, you venture into the woods where there are some costumes on display and you can test your knowledge on wild plant names! (Hint: one of the answers is Katniss). There is also an interactive touchscreen map of Panem along with Effie’s, Katniss’s and Prim’s reaping day outfit!

Just like Katniss’s journey, the next section of the exhibit was the Tribute Train. This set may have been my favorite of the whole exhibit. It is so stunning and and well thought out with the windows being blurry to give the illusion that you’re moving. Some outfits from the Victory Tour are on the train as well. There’s also a great photo opportunity in the back of the “car.” And with that, we’re off to the Capitol!

The Capitol section of the exhibit is extravagant and filled with some of our favorite costumes! President Snow’s set is the first thing you see and directly across is Katniss and Peeta’s costumes in the chariot from Catching Fire. You can also get yourself interviewed by Caesar Flickerman himself or take a look at Cinna’s sketchbook in this section too.

The next part of the exhibition is where I began to feel weird… Like I was too much into the Capitol. The next section of the exhibit was arena themed. There was an interactive gamemaker station where you can view different mutations, check out the Quarter Quell arena, and learn more about the gamemakers. There was also an interactive station where guests can learn a fight choreography from the stunt choreographer himself!

Following the arena/training center, we arrived in D13 where there was the powerful set from where Coin gives her speeches. (Make sure to take a look at Effie’s shoes here… They’re crazy!). There are a ton of costumes throughout this section, as well as weapons. There’s even a sneak peek of Finnick’s trident which will be seen in ‘Mockingjay Part 2.’ You can also create your own propo at an interactive station in this section too!

The grand finale of the exhibition seemed to be Katniss’ signature outfits from each film all on display. There is her hunting costume from the first movie, the wedding dress from the second film (and transformed Mockingjay dress), and the mockingjay suit from Mockingjay Part 1 and 2. They’re all so truly beautiful in person; your mouths are guaranteed to drop to the floor.

At the end of the exhibition, you have the opportunity to take part in the Catching Fire tribute parade! You stand in front of a green screen and react to whatever the attendant is telling you to… It’s hilarious and great fun and I highly recommend you do it. I did it and I have 0 regrets; the video is a masterpiece.

There is also a little fan art section of the exhibit, including our very own jabberjay Cory Simpson’s work!

Last but certainly not least is the gift shop. Oh my gosh guys. I can literally spend my life savings on this place… There is Hunger Games EVERYTHING! There’s even a whole jewelry section including a $7500 diamond and gold mockingjay necklace… This gift shop is the real deal guys.

Some of the items on sale at the gift shop:

I honestly felt like I was immersed into the world of The Hunger Games. The set up and placement of each costume, set, or prop is so well thought out and it shows. The amount of detail in each set is impeccable as well. If you are big fan of The Hunger Games franchise, The Hunger Games: The Exhibition is a must do! 😀

From New Jersey, Grant enjoys eating food and obsessing over The Hunger Games. Grant also likes going to NYC and the beach in the summer. Unlike everyone else, Grant has no degrees in anything because he hasn't even graduated high school yet... *sigh*
@granteverdeen
Previous GMA Debuts Clip of Jennifer and Josh at the Hunger Games Exhibition
Next The Hunger Games StageAround Coming in 2016

Media outlets down under are now confirming some new details about the upcoming Australian leg of the Hunger Games Exhibition World Tour, coming to Sydney this December.