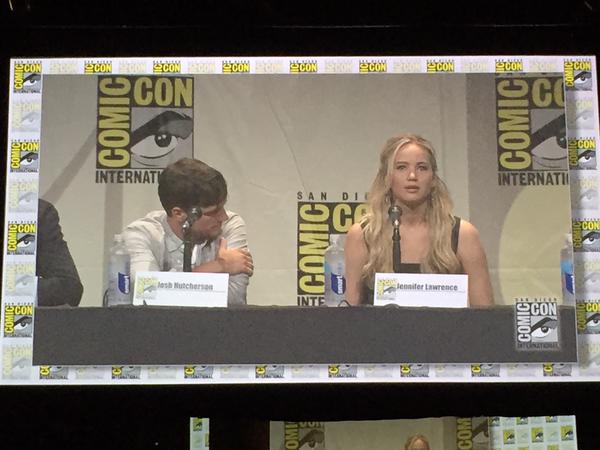 Fans lucky enough to be in Hall H for today’s The Hunger Games: Mockingjay Part 2 panel at San Diego Comic Con 2015 got a double special treat. The panel started off with a boom, with drummers setting the tone for the entrance of the cast. The District 13 propo (which we got a sneak peek of yesterday) played, and the cast came onto the stage.

Then director Francis Lawrence had a surprise: a new trailer! The trailer, which is exclusive to Hall H, contained numerous new scenes including lizard mutts, parachutes, and Johanna Mason. Here are some tweets about it:

#MockingjayPart2 trailer is phenomenal. This movie is going to be incredible. #SDCC

OMG! Watching a NEW FULL TRAILER! #MockingjaySDCC ITS SO AMAZING! You will CRY! "TURN YOUR WEAPONS TO SNOW" ???

The #mockingjaypt2 trailer (not the propo) was AMAZING!!! Can't wait for everyone to see it! #mockingjaysdcc #unite

A 40-year-old mom to three living in Honolulu, Hawaii, Crystal Watanabe is a full-time freelance fiction editor.
@pikko
Previous UPDATED: Hunger Games Cast to Sign at Comic-Con on 7/10 and 7/11
Next VIDEO: Watch District 13 Propo ‘Stand With Us’