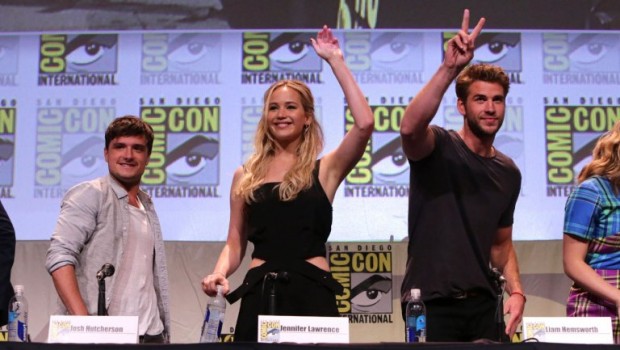 Unless you’ve been living on the moon and not in this fandom, a new full trailer for The Hunger Games: Mockingjay Part 2 debuted at San Diego Comic-Con on Thursday. Today the lovely folks over at /Film have written a detailed breakdown of the trailer. While the new trailer has not been officially confirmed as to when it will be published online (Francis Lawrence told Hall H it wouldn’t be for a while), we do know that it will be released at some point. So if you’re the kind of person who does not want to be spoiled until official release (even though you cannot visually experience it now) and would like to be surprised when that blessed day comes, I would advise you to stop reading now… still here? Okay. Here is the beginning:

Establishing shots show The Capitol in smoke, sweeping landscapes, shots of Jennifer Lawrence appear as Donald Sutherland‘s voice is heard as President Snow, “I’m watching you and you’re watching me. My dear Miss Everdeen, make no mistake, the game is coming to its end.”

District 13 is rallying their troops, preparing for an assault on The Capitol. Patina Miller is seen as Commander Paylor, giving a speech as Katniss prepares to march an army into the city, “Our future starts tomorrow at dawn, when we march together into The Capitol.” Snow has turned the city into a “minefield of booby traps” and “Sadistic inventions designed to make sport of our death.” Cue Finnick’s (Sam Claflin) line, “Welcome to the 76th Hunger Games.”

Then we get a montage of action shots, Katniss shooting an arrow down the street, triggering a barrage of flames. She marches down the main street in The Capitol where the parade took place before, cut to Gale (Liam Hemsworth) who says, “We’ve got one shot, let’s make it count.”

An action montage begins, showing off the fight to take The Capitol, including some shots of slimy, mutant monsters. Buildings falling, arrows shooting, lots of gunfire. There’s a quick shot of Prim (Willow Shields) as Katniss says in voiceover, “Nothing is safe while he’s alive.”

Update: We now have a transcription of the lines used in the new trailer. Please do not read on if you do not wish to be spoiled:

Snow: “I’ve been watching you. And you watching me. My dear Miss Everdeen, make no mistake, the game’s coming to its end.”

Paylor: “For the first time in our lifetime, we’re standing together with 13 Districts. Our future starts tomorrow at dawn when we march together into the Capitol. To slow our advance, President Snow is building a minefield of traps: the sadistic inventions of Gamemakers built to make sport of our deaths.”

Finnick: “Ladies and Gentlemen, welcome to the 76th Hunger Games.”

Katniss: “Nothing good is safe while he’s alive. Snow has to pay for what he’s done.”

Peeta: “Our lives were never ours. They belong to Snow and our deaths do too. If you kill him Katniss, you can end all of this. All those deaths, they mean something.”