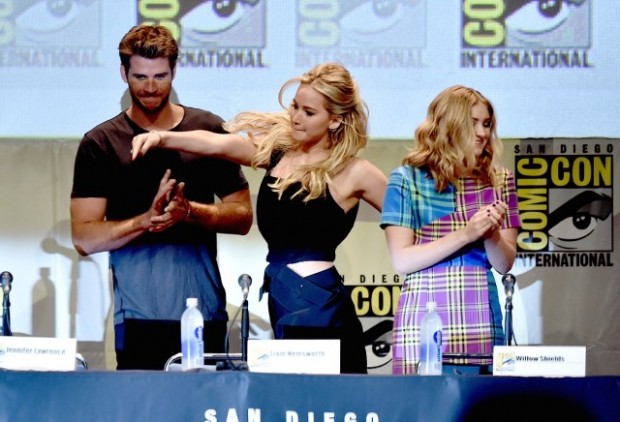 Just like Jen up there, all of us tributes should be doing a happy dance right now, because the 2015 San Diego Comic Con was a massive success for The Hunger Games: Mockingjay Part 2– not just for us as fans, but also by the numbers.

Yesterday, Twitter released their post-SDCC report and in an incredible turn, the numbers revealed that Mockingjay Part 2 was the most tweeted-about movie during the four days of the convention. Yes, you heard that right: we beat out juggernauts such as WB’s Batman vs Superman: Dawn of Justice, or even Star Wars: The Force Awakens. Give yourself a pat on the back, tributes! 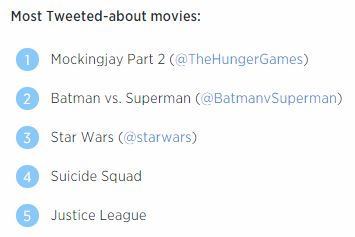 Also worth mentioning: our leading lady, Jennifer Lawrence, was the most tweeted-about celebrity during the event, although those numbers of course are bolstered by her presence in both the Mockingjay Panel and the X-Men: Apocalypse panel (both of which– allow me a moment to fangirl for two of my biggest fandoms here– were absolutely amazing).

Please keep in mind that these are Twitter numbers and they aren’t an indicative of what the box office will look like for these films once they open in theaters. Still, it’s always great to have it confirmed that there is real buzz around our final movie and that our fandom won’t necessarily be overshadowed the “bigger” and “more hyped” fandoms.

What do you think of these news? Were you tweeting along to the panel on Thursday? Tell us your thoughts in a comment!

VIDEO: IMDb Interviews the Hunger Games Cast About the End of an Era

Jennifer Lawrence, Josh Hutcherson, Liam Hemsworth and Willow Shields on Comic-con fandemonium, the end of an era, memories they cherish and what they can't wait to see in Mockingjay Part 2.