Josh Hutcherson attended the show and accepted his surfboard. 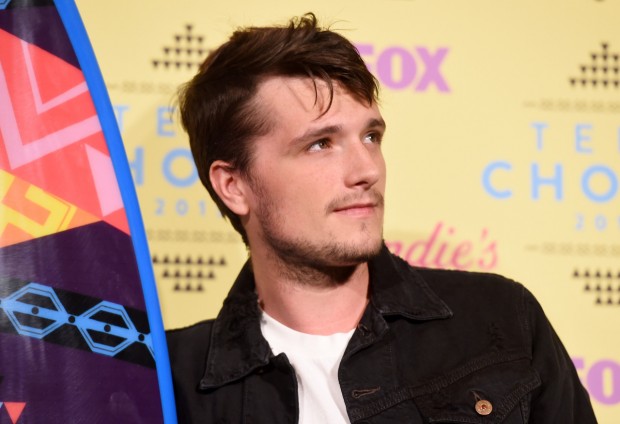 During his acceptance speech, Josh acknowledged the cast and crew who’ve worked on The Hunger Games films:

The cast, the crew, this is like, 400 people that make every one of these movies, so, this award goes to them, because there’s a lot of people who don’t get recognition for their hard work: visual effects, special effects, hair and make-up, wardrobe, stunts, grips, electricians, everybody! So I share this with them, I share this with you guys, because throughout all this madness, the fans have always been the backbone, and made me wanna keep going. So, I appreciate it, and thank you guys very much.

He also addressed the ending of The Hunger Games that comes with Mockingjay Part 2‘s release this summer:

The Hunger Games has been a huge part of my life for the past… Almost 5 years now and it’s coming to an end, and it’s really sad. So if we wanna cry together, we can do that, and it breaks my heart, because these movies have been the best to me.

If you want to watch his speech, you can view a low quality video of it here.

Congrats to Josh, Jennifer and the cast and crew of Mockingjay!

At 20-years-old, Hannah just graduated from university with a Bachelor of Fine Arts with a major in Creative and Professional Writing and a minor in Entertainment. Loves puns, sleeping, film and TV, books, her husky and musical theatre.
Previous Happy Birthday, Jennifer Lawrence!
Next Katniss Displayed on the Cover of Australian Magazine “Film Ink”