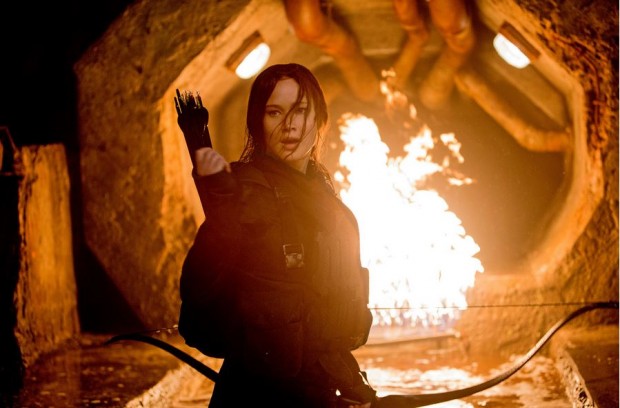 The New York Times released today an interview with Jennifer Lawrence in which she discusses the pressures of fame and how they’ve changed since the beginning of her career. Included in the article was a brand new still from The Hunger Games: Mockingjay Part 2 where you can see Katniss in action, standing in front of a fire ball in a tunnel– seemingly one of the scenes in the sewers underneath the Capitol.

You can check out the still above, but I also encourage you to read the full interview, because it presents a very human picture of Jennifer and what actors/actresses in Hollywood have to deal with when they rise to fame very quickly:

You Google yourself? You must promise to never, ever do that again.

You try being 22, having a period and staying away from Google. I once Googled ‘Jennifer Lawrence Ugly.’ [Laughs] Do I sound bitchy?

Not at all. You sound like a real person.

I can’t think of a more wasteful use of my time than to worry about this. Why do I care what people think? But I do. I just can’t pretend I don’t care. I get really insecure about it. The world makes an opinion of you without ever meeting you. That worry should not bother me, but it does. It bothers me. [Takes a sip of water.]

I’m going to leave here and think, Oh God, why couldn’t I just have been cool and confident?

She even talks about our franchise and her friendship with her fellow cast members:

What are you going to miss most about your “Hunger Games” experience? Your cast mates? I know you’re particularly close to Josh Hutcherson and Liam Hemsworth.

On the last day it was so emotional, and we kind of couldn’t let go of each other. We were kind of freaked out that something was ending. And then, a week later, we were hanging out at Liam’s house. We were like, “Oh, O.K., so now we can just be friends.”

I didn’t dream about anyone, but there’s always tonight.

In the article she also talks about her recent friendship with Amy Schumer, the script they’re working together, meeting Kris Jenner, and several other topics. It’s a really great interview, with Jennifer being charming as always, but honest in a way that might make you want to reach through your screen and give her a hug. I highly encourage you all to read it!

In the meantime, what do you think of this new still? Which point in the movie do you think it takes place in? Speculate away in the comments!