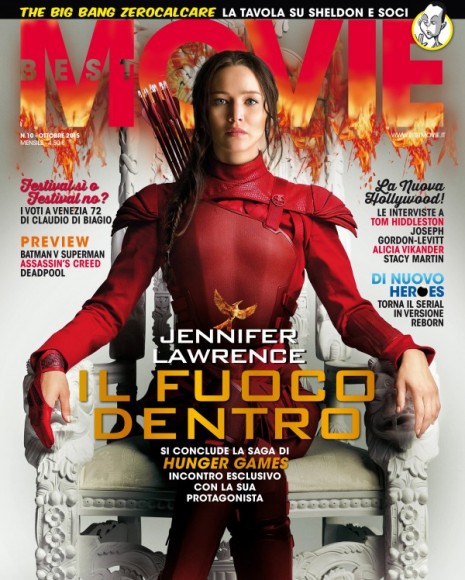 The October issue of Italian magazine Best Movie is hitting digital markets this Saturday, and its cover features none other than our fierce girl on fire, Katniss Everdeen. According to their website, the issue will also include a lengthy feature on Jennifer Lawrence and The Hunger Games: Mockingjay Part 2.

The battle against Panem draws to a close and Best Movie will recount the latest assault to the Capitol from the protagonist of The Hunger Games herself, who tells us about her last time in the role of Katniss. In addition you will find a special interview with all that awaits you in the Hunger Games – Mockingjay: Part 2.

Revolutionary Girl
Interview with Jennifer Lawrence, the most spontaneous and irreverent diva in Hollywood, in the role of the rebellious Katniss, back to nock her arrows for the latest chapter in the saga of The Hunger Games: Mockingjay – Part 2.

If we think of a rebel on the big screen, we think immediately of her, Katniss, the courageous girl of The Hunger Games, interpreted by the biggest diva Hollywood has today. We met her to tell us what to expect from the last chapter, Mockingjay – Part 2.

Looking through the preview it seems the feature doesn’t include any new full stills, but we do get little glimpses at characters that haven’t been featured in any officially-released stills yet (Haymitch, Prim, Finnick & Annie, Lyme, TIGRIS), and the layout for the article is pretty cool, so it’s worth a look even if we don’t know how much of it will focus on the movie itself and how much will focus on Jennifer. You can see some screen grabs from the preview below:

Italian fans, will you be purchasing this issue of Best Film? If you do, be sure to tell us about it, what’s in the article itself and if there are any new tidbits from Mockingjay Part 2. Here’s hoping more and more magazines featuring Mockingjay Part 2 start coming out as we get closer to the premieres!

Thank you to PanemTimes on Twitter for pointing us in the direction of this cover.