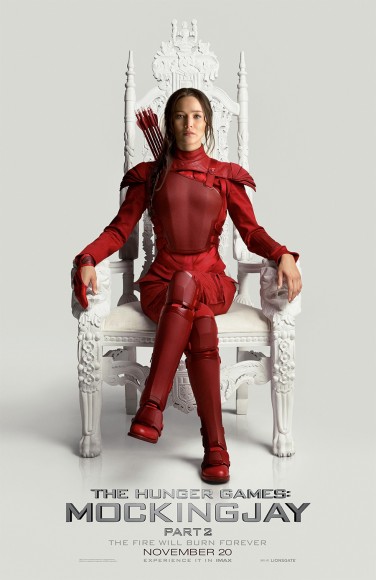 Few people out there would be surprised to hear that the upcoming Star Wars: The Force Awakens is one of the most anticipated movies coming up. But there is one other movie this year that has it beat as far as industry tracking goes, and it’s none other than our very own Hunger Games: Mockingjay Part 2.

The most mind-blowing part of all of this is that we’re not only talking about the most anticipated movies of the fall season, or even of the year: According to the Piedmont Media Research company, Mockingjay Part 2 is the most anticipated movie ever recorded in their polls, earning a higher score than even this summer’s Avengers: Age of Ultron, which previously held the record.

The company rates consumer engagement on a scale of zero to 1,000, and the fourth and final “Hunger Games” had a 514 rating, beating last summer’s “Avengers: Age of Ultron” and its score of 509, as the best overall number it has ever recorded.

The “Star Wars” sequel posted a 495 rating, the third best figure since Piedmont began its surveys.

I don’t know about you guys, but for me this is huge. While it’s not necessarily a good prediction of what the box office is going to look like once both movies are out, it’s a pretty good sign of audience interest, and it says a lot about this so-called “franchise fatigue” many industry experts have been touting since before Mockingjay Part 1 hit theaters. But what do you guys think? Do these numbers get you even more pumped for the movie? Tell us in a comment.