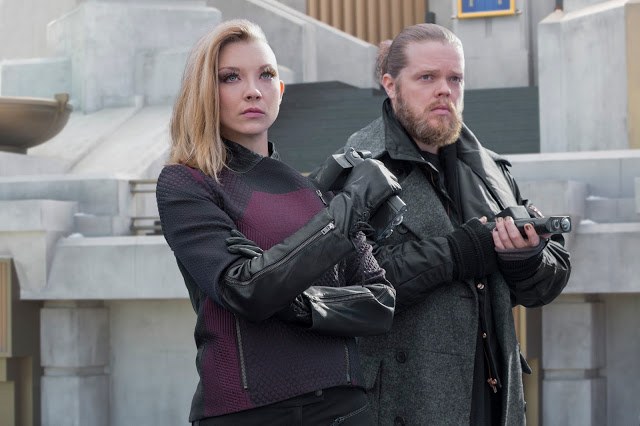 As we previously reported, Lionsgate and Samsung are teaming up with Best Buy to bring Hunger Games fans an exclusive look at the final trailer for The Hunger Games: Mockingjay Part 2. We’ve confirmed with Lionsgate that due to limitations on the VR glasses in stores and the need to keep the wait time down for each viewer, the VR experience preview will be just over a minute long.

In addition, there is a Mockingjay Part 2 moment that has been VR-ified for the event, so be sure you check it out in addition to the trailer!

The full six-minute experience will be released at an event on October 8 in New York, and on Milk VR for those with capable devices. Lionsgate aims to let fans that do not have Samsung devices be able to see the experience one way or another before the film’s release on November 20.

Read the official press release below:

SANTA MONICA, Calif. and NEW YORK, SEPTEMBER 29, 2015 – Lionsgate (NYSE: LGF), a premier next generation global content leader, and Samsung Electronics America, Inc. have teamed up once again to give fans access to exclusive content and experiences leading up to the November 20th worldwide launch of The Hunger Games: Mockingjay – Part 2, the final installment of the global blockbuster The Hunger Games franchise. Building on the alliance established for The Hunger Games: Mockingjay – Part 1, Samsung and Lionsgate will expand the world of The Hunger Games with exclusive content and state-of-the-art virtual reality technology.

From October 2-4, fans who visit the Samsung Experience Shops inside more than 1,000 Best Buy locations can view a never-before-seen final trailer on the Galaxy Tab S2, get a sneak peek at an immersiveThe Hunger Games virtual reality experience with Samsung Gear VR and check out the exclusive new Mockingjay app. Additionally, consumers who purchase the Galaxy Tab S2 will be given a digital download of the first three films in the Hunger Games franchise, redeemable via Samsung+, the premier customer service and loyalty app for Galaxy owners to get the most out of their devices. For participating Samsung Experience Shops locations, visit www.Samsung.com/mockingjay.

To celebrate The Hunger Games and its global fandom, Lionsgate and Samsung will present The Hunger Games Tribute Awards. The Tribute Awards will honor the best of the series and the internet as voted on by the fans, by recognizing inspired fan art in a variety of categories such as Best Film Parody Video and Best Fan Costume. The Tribute Awards will culminate with a global fan appreciation event at the Samsung Studio Los Angeles on October 31st, where the franchise’s most loyal fans will be acknowledged for their dedication and the cast of The Hunger Games: Mockingjay – Part 2 will reminisce on the series as it comes to an end. Fans across the world will be able to experience the event when it is available online after it concludes at Tribute.The HungerGames.movie.

“Our goal is to create new and exciting experiences for consumers,” said Joanne Lovato, vice president, Brand and Entertainment Marketing at Samsung Electronics America. “Through our continued partnership with Lionsgate, we look forward to sharing exclusive content with fans and giving them never-been-seen-before footage from the entire Hunger Games series, including the upcoming Mockingjay – Part 2.”

“We’re thrilled to continue our partnership with a consumer technology leader and innovator like Samsung to create unique ways to engage The Hunger Games fans that extend the brand beyond the screen,” said Paula Kupfer, Senior Vice President, Global Partnerships and Promotions, Lionsgate. “The Tab S2 sneak peek and Gear VR experiences in this promotion offer unique and engaging opportunities for fans to become immersed in the world of The Hunger Games while also building excitement for the November 20th global launch.”

The Hunger Games:  Mockingjay – Part 2 will have its gala US premiere in Los Angeles. On the red carpet, Samsung will have an exclusive fan bleacher section to reward certain Galaxy owners and The Hunger Games fans with experiencing the premiere.