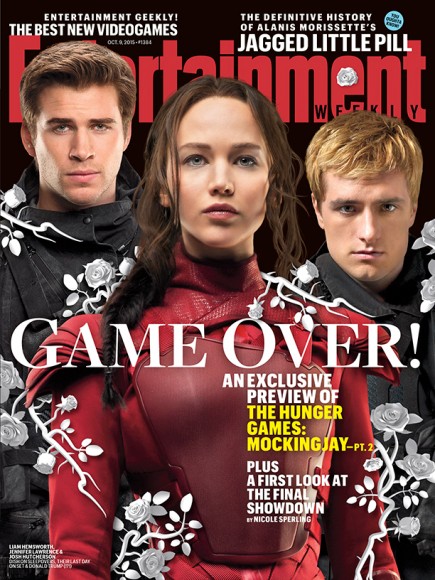 Whatever (supposed) friction there was between Lionsgate and Entertainment Weekly last year is decidedly over, as the magazine is releasing “an exclusive preview of The Hunger Games: Mockingjay Part 2” tomorrow (October 2nd). Our main trio covers the issue (creepily adorned with CGI white roses), and it will include a significant amount of content from the movie, including an interview with Jen, Josh and Liam.

Among the things they talk about in the interview is the scene they were most looking forward to:

LAWRENCE I was excited about the scene at the end of the movie when I shoot my arrow—I won’t give it away— because when I was doing my archery training at age 20, that was always the scene I pictured. Five years ago I used to look at a stack of hay and pretend that it was this moment, and now it is here.

How was your aim?

LAWRENCE It was CGI, so let’s just say I nailed it.

HUTCHERSON For me it was the scene where Peeta had to freak out and lose his mind. I was more excited than nervous, but then right before we shot, I realized I hadn’t planned on what the hell I was going to do. And then they say “Action.” You’re like “Ah!” And you just kind of do it.

In a different preview, they also discuss the topic of totalitarian dictators– *coughcough* I mean Donald Trump:

“If Donald Trump becomes president, that will be the end of the world,” says Lawrence.

Her co-star Liam Hemsworth feels the same: “I’ll back you up on that,” he adds.

Josh Hutcherson, the third lead in the massive franchise, can’t quite believe Trump’s run for the presidency is legitimate. “It’s a publicity stunt,” he says. “It can’t be real.”

Independently of their political opinions (however hilarious they are), the issue promises “a first look at the final showdown” so that should be interesting. Will you be buying this issue when it hits newsstands tomorrow? Tell us in a comment.

Carla Pinilla is a 34-year-old Chemical Engineer from Panama city, Panama. A consummate fangirl, she spends her time reading, writing (mainly fanfiction), or watching way too many TV shows.
@https://twitter.com/girls_are_weird
Previous Get Yours Now! Tickets for ‘The Hunger Games: Mockingjay’ Part 2 Now on Sale
Next PHOTO: New ‘The Hunger Games: Mockingjay’ Part 2 Still of Finnick and Katniss