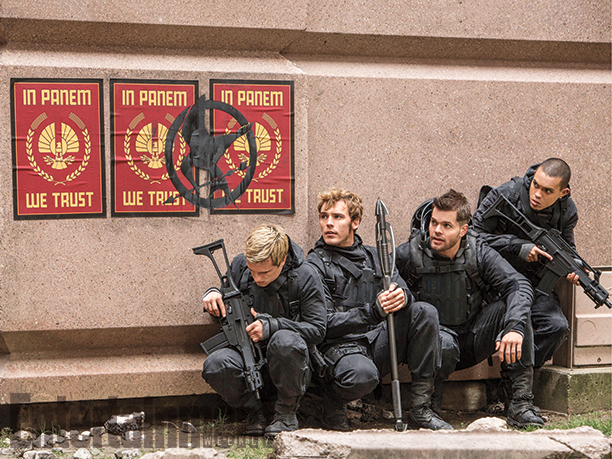 Sometimes Tumblr gets a bad rep when it comes to fandom, but really, the micro-blogging platform has its moments.

Just on the heels of Entertainment Weekly’s announcement of their special Mockingjay Part 2 preview issue, Tumblr user damndansmith started posting photos of the contents of the magazine’s new issue, and there are so many (AMAZING) new stills that I think my head is going to explode. (See, Lionsgate? Making me happy is really easy. Just feed me movie stills!).

Among these new pictures are Katniss in the sewers, another one of Katniss and Cressida excellently tagged “Kiss your Capitol goodbye,” our first glimpse of Effie (!!!), Katniss and Snow in what appears to be their tense conversation near the end of the movie (!!!!), Katniss and Gale seemingly about to kiss, and a few of the boys of Squad 451 sitting on a curb in the Capitol.

UPDATE: Entertainment Weekly has released better quality versions of some of the stills (including a Buttercup still that… may or may not be an old still from Mockingjay Part 1?), so we’ve updated the gallery below!

UPDATE 2: Yet another update from EW, this time giving us our first look at the confrontation between Snow and Katniss at the rose garden.

I know the Gale/Katniss still is already making people groan endlessly on social media, but regardless of my shipping preferences I must say I love every single one of these stills. Effie, Gale/Katniss and the Squad 451 one are my favorites (do not get me started on how perfect that Squad 451 still is. All kinds of perfect. I could gush poetic about that one for hours!).

Hopefully Lionsgate will release these in HQ sooner rather than later. But what do you think of these? Comment and tell us which still you liked the most.