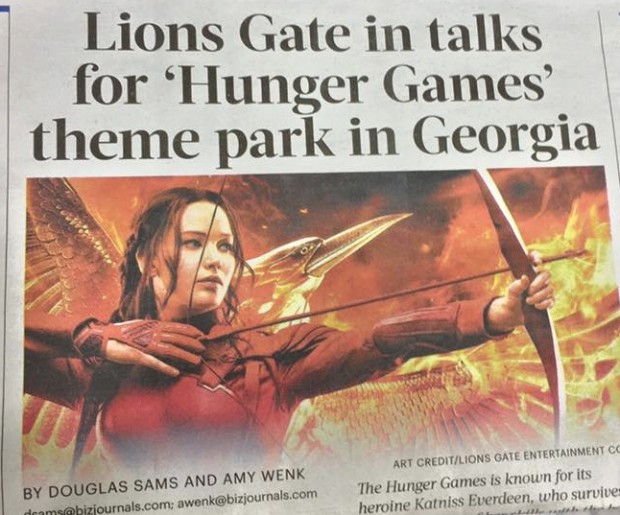 Not to be the tribute who cried wolf, but more rumors are circulating of a possible “Hunger Games” theme park in Georgia. Hitting the front page of the Atlanta Journal Constitution (AJC), the story may be consumer bait, but there’s enough to allow for a healthy speculation.

The AJC states, in addition to a park in Dubai, “The studio [Lionsgate] also reportedly is eyeing a large tract [of land] in Bartow County, the Atlanta Business Chronicle reports.” The website cometourgeorgia.com‘s list of Georgia’s Hunger Games filming locations doesn’t include Bartow County, which is Northwest of Atlanta, but a Hunger Games theme park seems a logical vested interest Lionsgate might have in the area.

Even more perplexing is the conflicting desire whether to be excited or disturbed by a theme park in this genre, unless it will be dedicated more as a tribute to movie memorabilia. With Mockingjay: Part 2’s release coming in November, it seems like a great time to make a possible theme park announcement.

When AJC tried to get in contact with sources that might have information on a possible theme park, they declined to officially comment but reportedly said,  they would be ready to “talk in the next couple of weeks [about] something that is meaningful.”