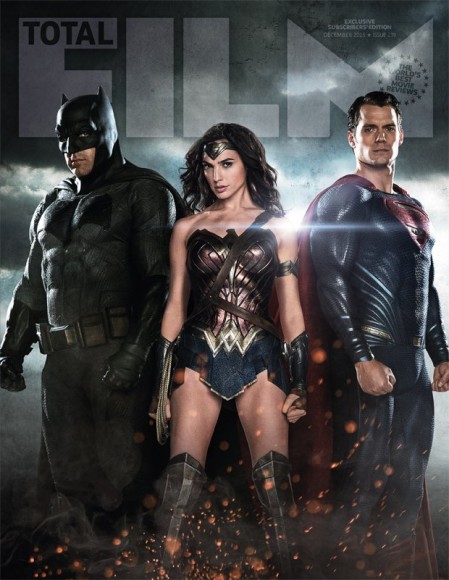 The new issue of Total Film was released today with an article about The Hunger Games: Mockingjay Part 2 including brand new interviews with Jennifer Lawrence, Josh Hutcherson, Liam Hemsworth, Natalie Dormer, Francis Lawrence and Nina Jacobson. The gang begin with talking about how Wes Chatham almost drowned on set during the lizard mutt scene and how that whittled down the press gossip line to be Jennifer Lawrence to make it more interesting. Flaunting their never ending capacity to be funny and charming, Jennifer gets distracted during their interview because her friend is packing for her and she texts to make sure she gets the right curling iron and Jen and Josh display their usual fun chemistry:

At one point she yawns, loudly and theatrically as Hutcherson attempts to answer a question. “I didn’t even think about it!” she says, catching herself. “I’m so sorry!”
“You’ve done it like three times in two days of press!” Hutcherson reprimands her.
“I don’t do it on purpose! If it makes you feel any better it’s totally natural!”
“It doesn’t actually!” Hutcherson mock-fumes. “It makes me feel worse that it genuinely is boring! It’s not a joke!”

Nina Jacobson talks about one of the blessings of the franchise is that, rather than growing apart in each installment, the cast became a family and how Katniss now dictates her own path in Part 2. Jacobson comments on the meteoric rise of Jennifer Lawrence from young talent auditioning for Katniss to the tippy top of the Hollywood A-list during the course of The Hunger Games, and how the franchise is kicking hard at the female protagonist door:

It’s a door that we will be kicking for years to come. But have we made a really good dent and maybe kicked off one of the hinges? Yes. But there’s definitely at least one more hinge. A compelling female protagonist is as universal a magnet to audiences as anything. When I was coming up as an executive, it was considered conventional wisdom that girls will identify with a male protagonist but boys will not identify with a female protagonist. And that just makes no sense. At the very least our films and a good handful of other movies that have come out during the five years that we’ve been in the ether have been kicking down that door and disproving a ridiculous premise. The Hunger Games stands proudly in that line of movies, whether it’s Bridesmaids or Frozen or Spy. Right now you can have an all-female Ghostbusters – honestly unimaginable 10 years ago. I think that’s a legacy.

Francis Lawrence added to the debate fearing that all that could happen is one female-led movie to bomb for the door to be slammed shut again.

On the sequel/prequel/expanded universe considerations that every other series is being subjected to, super producer Nina Jacobson gave comforting words that she wouldn’t jump on board to a Panem-based story without Suzanne Collins:

I don’t have any idea for how to extend it, and I have no plans to right now. If Suzanne Collins called me up one day and said ‘I have an idea…’ I’d be there in a second. But I would always follow her lead and right now there are no plans. I wouldn’t know how to do it myself and I wouldn’t want to do it if she didn’t, if it didn’t come from her.”

A story isn’t a story without an ending. Characters in cinematic universes are continually being denied an ending these days. One of the most satisfying things is that we’ll be able to see Katniss and co’s story completed (and enjoy it on repeat, obviously). Though the trio have the final word with Josh deciding on a reboot with himself playing Haymitch, Jennifer as Effie and Liam as their abandoned son, Snow, with an axe to grind on both of them!

There is also a new interview with Natalie Dormer where she talks about Cressida kicking serious butt in Part 2, filming the extensive Squad 451 action scenes in the Capitol, Francis Lawrence giving her tips and freedom to give Jennifer direction as Cressida, possibly acting in Amy Schumer and Jennifer Lawrence’s future scripted film and shooting Game of Thrones. Intriguingly, while talking about directing Jennifer she described an improvised moment in a scene between Cressida and Katniss:

Well, there’s a moment at the beginning of the film where she’s shooting a bow and arrow, and I hold her back – I make her wait. Then she finally shoots it. That was ad-libbing. That wasn’t scripted, and she plays it beautifully. She stays fully in character. It’s a really lovely moment for her – informative, which I assume is why it’s in the movie.”

Thanks to the-bleedinglove12 on Tumblr we have these scans. And we snapped these pictures of the Natalie Dormer interview.

The latest issue of Total Film (December 2015) is on newsstands from today.

UPDATE: We now have a scan of the Natalie Dormer interview for you: 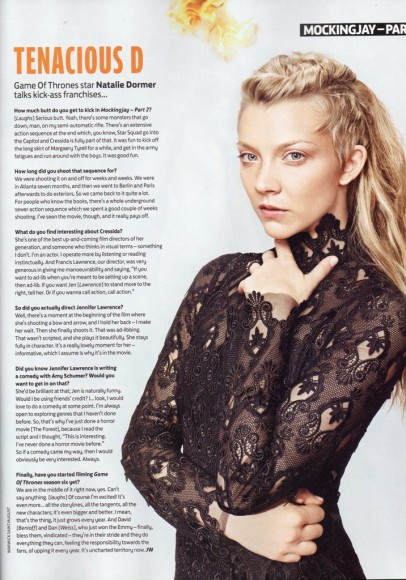