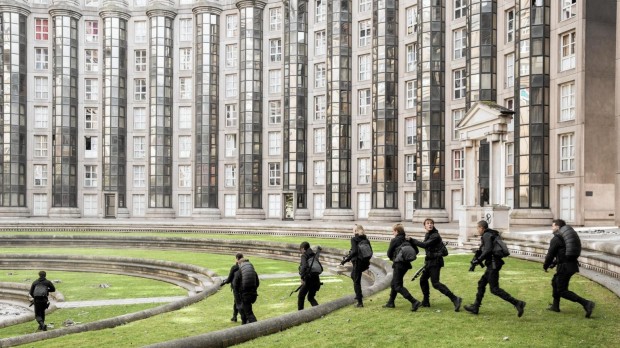 In all of the hoopla that these new stills from The Hunger Games: Mockingjay Part 2 generated earlier, it may have passed your notice that they came with insights of exactly what is happening from Francis Lawrence and Nina Jacobson in an article in the LA Times. Francis describes the still above:

“This is a building that we found outside of Paris,” Lawrence said. “If you know the books, there’s a sequence where they set off a trap with toxic oil, this black sludge that comes pouring down onto them. This is just after that sequence. In the movie, this has all been digitally enhanced and the whole bottom half of this courtyard has been covered in a black, hardened tar. The place is called Abraxas. When we knew we had to go deep into the Capitol we wanted to try to find as many real, immersive environments as possible. So we went on a search for architecture around the world that was aesthetically what we needed. We wanted that cross between brutalism and classicism.” 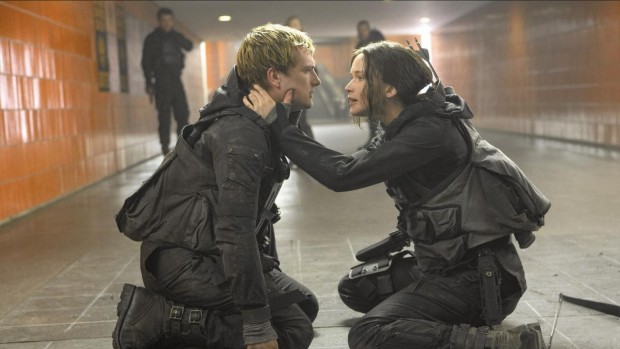 “As they make their way through the Capitol, some of them make it, and some of them don’t,” Jacobson said. “This moment with [Katniss] and Peeta [Josh Hutcherson] is a big turning point, this is her trying to bring him back to her. Everything that they are going through in this assault is pushing him to the limit.” Clearly Katniss still has a connection to the former prisoner Peeta, “He’s falling apart, and she’s trying to keep him with them,” Lawrence said. “And they have to keep moving. So this is actually a very fast, urgent moment that’s not totally tender, although there’s some tenderness to it.” 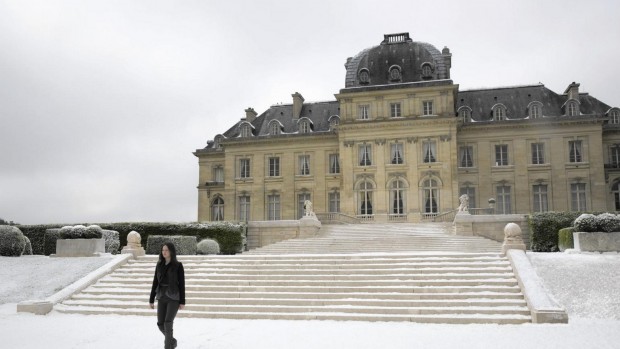 “That is Snow’s mansion,” Jacobson hinted. “There’s still quite a bit of reckoning to be done.”

To read more insights including a hint that Gale uses his incendiary arrows for visibility in the tunnels, head on over to the Los Angeles Times.