In anticipation of the film’s release, IMDB.com has given The Hunger Games: Mockingjay – Part 2 page a makeover to match the film and its “style”. Just like last year!

Check it out for yourself! 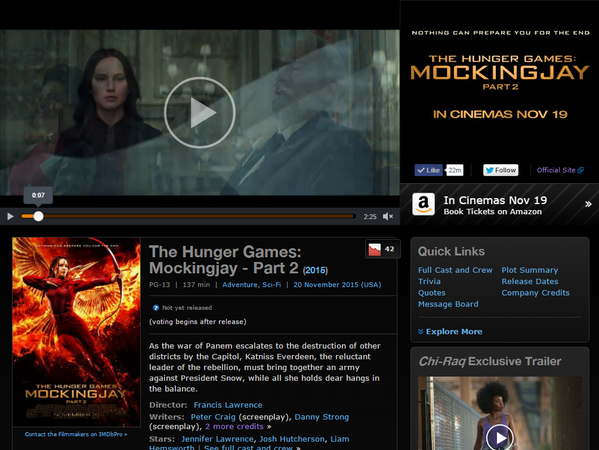 Also note that the film has been given a new description. It reads:

As the war of Panem escalates to the destruction of other districts by the Capitol, Katniss Everdeen, the reluctant leader of the rebellion, must bring together an army against President Snow, while all she holds dear hands in the balance.

I don’t know about you, but even little things like this are getting me pumped!

At 20-years-old, Hannah just graduated from university with a Bachelor of Fine Arts with a major in Creative and Professional Writing and a minor in Entertainment. Loves puns, sleeping, film and TV, books, her husky and musical theatre.
Previous First Full Review of ‘Mockingjay’ Part 2 Hits the Web Via Man vs Pink
Next Jabberjays.net Exclusive: Mockingjay Part 2 World Premiere Interviews