MTV Secrets from the Berlin Set of The Hunger Games: Mockingjay Part 2 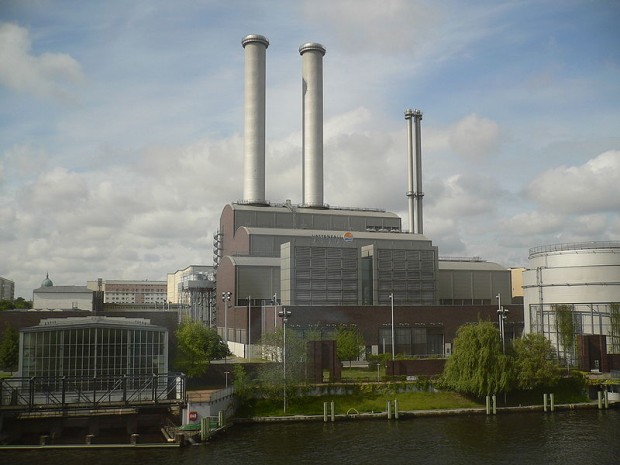 Along with the excitement that is reviews and of course the movie itself, one of the things I enjoy most as the movies come out is learning more about them, particularly their sets and anything about filming. So it’s a treat this week to find out a little more about The Hunger Games: Mockingjay Part 2 thanks to a tour taken by MTV and other journalists.

The Kraftwerk plant, located in Köpenicker Strasse in Mitte, was the perfect location for Beetee’s weapons training facility. “The size and scope of this place you can’t replicate, so we wanted to find as real an environment as possible,” Lawrence explained. “It was actually quite difficult to find environments that felt like they were underground.”

The arrows were CG, and the flames were also added later, but everything else you saw in Beetee’s lair was built in Kraftwerk.

“It’s strange to come back here and find it empty, because for us, this location will always look like Beetee’s workshop,” Jacobson said.

District 2 is actually an old airport.

The Tempelhof airport closed years ago, but according to Lawrence — who used the site to film crucial District 2 scenes (there’s one with a train you’ll recognize instantly) in “Part 2,” and can be seen jokingly modeling above — the film crew’s use of the site had locals reeling. The city was set to vote on what to do with the airport site while “Mockingjay” was filming there, but since Lawrence and co. had to make the property look bombed-out to reflect the damage war had done to District 2, they (understandably) mistakenly believed that Tempelhof had been destroyed without their permission. “All the neighbors here started to panic that the building was being knocked down before the vote even happened… [they were] complaining to the local government.”

The crew came to Berlin because recreating its aesthetic onscreen was “impossible.”

According to Lawrence, the move to Berlin from Atlanta, Georgia to Berlin (and Paris) wasn’t due to financial reasons. Instead, it was “born from the need for real, immersive environments for the streets of the Capitol and some of the new districts,” he explained. “We had already shot a lot of ’Catching Fire’ in Atlanta, we knew we were going to be back there for some of this, but we knew what the possibilities were architecturally in Atlanta. We knew they were limited, in terms of the things we would need.”

“The incentives in Atlanta were much better,” Jacobson added. “This was a creative choice. The scope, and the monumentality to the locations here, we could not find in the states.”

Woody Harrelson once skipped a Berlin shoot for a Lorde concert.

When one German reporter noted that a major concert venue was directly across the street from Tempelhof — and that she’d bumped into Woody Harrelson at a Lorde concert there — Lawrence remembered that concert, since Harrelson had been late for filming because of it. He noted that Lorde came to visit the cast before the show, and that he would have loved to have seen it, but unlike Harrelson he actually showed up to work instead. Oops!

Germany was chosen for some obvious reasons.

Though both Jacobson and Lawrence insisted that the city was mainly chosen due to its architecture, Jacobson did reveal that “there’s a political context to the books that is never lost to the people who live here, so it was a very fitting place to finish the movie.”

Tash is a 28-year-old Australian currently working in communications and media. A keen WW2 history enthusiast, particularly when it comes to the airborne, Tash also enjoys gaming, car detailing and spending far too much time on the Internet.
@https://twitter.com/tashonix
Previous Livestream for ‘The Hunger Games: Mockingjay Part 2’ Premiere in London
Next VIDEO: Flicks and the City Berlin Premiere Cast Interviews