Jennifer, Josh, Liam on Fans, Friendship, Sewers and Why Liam is Called ‘Tilikum’ 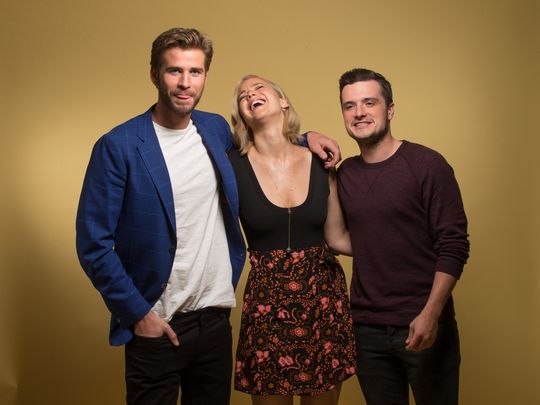 USA Today had an interview with Jennifer Lawrence, Josh Hutcherson and Liam Hemsworth about The Hunger Games: Mockingjay Part 2 after their handprint cermony at TCL Chinese Theatre. It seems the exhaustion and busy atmosphere of the press tour was already in full swing: “Was that today?” says Jennifer, “We have no concept of time anymore!” replies Liam. But luckily, the world tour gives each of them an opportunity to see the universal appeal of Katniss’ story:

“I see it at these fan events and premieres,” Lawrence says. “I see it when you’re face-to-face with people who love your movie so much that they’ll sleep in tents for days.”
“Umm, it’s called camping,” Hutcherson points out.
“Touche,” Lawrence says. “But yes, it’s hard to miss.”

They recount tales of how much fun they had in Berlin, living like they were in dorms and bursting in to each other’s rooms as though they were the cast of Friends:

“We were all on the same floor. All of our doors were always unlocked. You never knew who or when someone would come in,” says Lawrence, adding that she awoke one evening to find co-star Woody Harrelson barging in. “It was a blast.”

Not all sunshine and lollipops though. Once again the sewer scene was sited as a difficult place to film:

“We love being on-set and working. So you always have to tint it with that. But that was horrible,” Hutcherson says. “You felt terrified and a sense of panic. But at the same time you had a sense of this confined space.”
Lawrence even nicknamed the 6-foot-3 Hemsworth “Tilikum” after the bull orca whale living in captivity in a SeaWorld tank. Hemsworth couldn’t stand properly in the tight quarters.
“Josh and I at least could stand. We were sopping wet and cold. But we could stand up,” says Lawrence, laughing. “This poor guy was hunched over for 12 hours a day.”
“How many times did you hit your head? You had a couple of good knocks,” adds Hutcherson, as Hemsworth can just nod in agreement.

The meat grinder scene was also referenced as they run underground away from a pod that tears up the floor. It sounds as though it was just as dangerous to film as it appeared on screen. Squad 451 run for their lives as the camera rig follows them at a very rapid pace. It was always on Liam’s mind of the horror that would befall the cast if one of them tripped:

“You’re dead. It’s like a train hitting you,” Hemsworth says sincerely. “I had nightmares about that. You’re running and you see someone else trip just as their hand gets cut off. Or their head.”
“Gosh, you never said any of that to me,” Lawrence says.
“It’s all fun until someone gets their hand cut off,” Hutcherson adds.

And who ever said the Games weren’t real? You can read the full article at USA Today. Thanks to Barb (@bkubiak) for the tip!