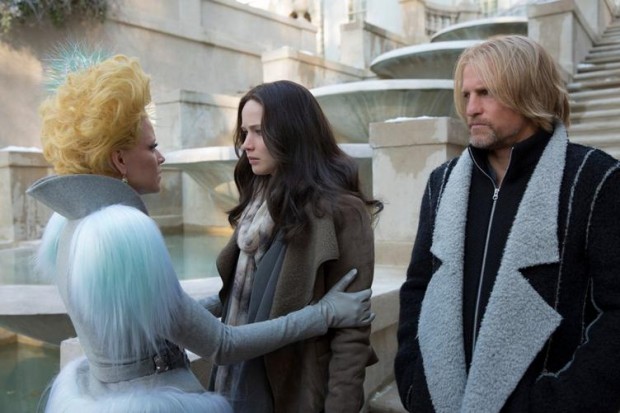 We have a really interesting and awesome interview to share with you. Some of the crew of The Hunger Games: Mockingjay Part 2, Francis Lawrence (Director), Nina Jacobson (Producer), and Peter Craig (Screenwriter) spoke to Buzzfeed about bringing Mockingjay Part 2 to life from the book, and the process of adapting the novel.

WARNING: There are MAJOR SPOILERS AHEAD for Mockingjay Part 2, and in the article referenced and linked.

In the interview, they discuss plot additions, what needed to be taken out to suit the movie, and why they made certain decisions about plot and character actions. A main point of this interview is that everything went past Suzanne, so we know that everything we see onscreen, she was happy to go ahead with. It is definitely a must read for fans of the series, because it gives great insight into the logistics of getting a hugely anticipated and wildly loved novel like Mockingjay into a feature length film.

The article is split up into sections of the movie that have key questions surrounding them and how they were done. From a fans perspective, the interviewer seems to ask the exact right questions to get answers we’ve been curious about since first seeing the movie.

We know a lot of people were after the ‘training’ scenes in particular with Johanna and Katniss, but Francis says:

“We were all very wary of training,” said Lawrence. “Training sequences quite often get montage-y, and I’m not a huge fan of that. To spend the time to do it right so it doesn’t feel like a montage would be also eating up a lot of time.”

They also discuss having Katniss run off to the Capitol, instead of being sent, the choice to give Finnick a ‘heroes’ death, Paylor, and killing Prim (amongst tonnes of other really interesting things, honestly, its such a good interview).

For all of you Everlark fans, theres a particularly awesome quote at the end regarding the epilogue, from our screenwriter, Peter Craig:

You can read the full thing here. Let us know your thoughts on what Francis, Nina, and Peter had to say!

Previous VIDEO: Jen, Josh and Liam Talk End of the Franchise With Josh Horowitz
Next ‘The Hunger Games: Mockingjay Part 2’ Soundtrack Available for Pre-Order on Amazon