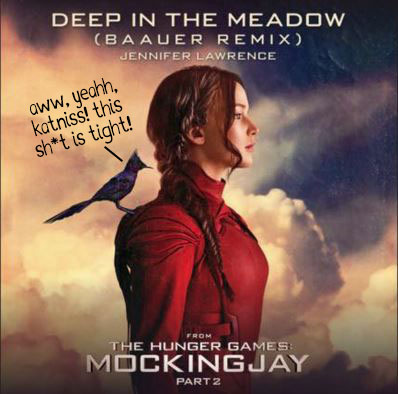 Fresh off the weekend buzz felt around the world with tributes finally getting to theaters to see The Hunger Games: Mockingjay Part 2, fans of Katniss Everdeen started off the week with a rather rude surprise: a remix of ‘Deep in the Meadow,’ the lullaby Katniss sings in the credits of the film.

Last year, after a remix of ‘The Hanging Tree’ was released and subsequently played on the radio, fans were left rather dumbfounded at the decision to create such a thing. After a mess of a wildly off-the-mark soundtrack curated by Lorde, the score and Jennifer Lawrence’s powerful a capella singing was a welcome relief for fans looking for music that fit the tone of the film’s somber feel, only to have it be disrespected with a “muttation” of the song.

Although it’s obvious, I feel like it’s important to note that the song is a lullaby, and let’s face it, lullabies are simply not played on the radio, remix or no. There’s a reason we don’t get techno remixes of Twinkle Twinkle Little Star or Hush Little Baby: they’re soothing, gentle songs meant to make people feel safe and warm. They’re protected by an unspoken respect for the tone, intent, and relevance.

Unless, of course, there’s money to be made off of the world’s most popular actress.

When I wrote my editorial about The Hanging Tree remix last year, I never thought I’d be sitting at my computer a year later writing another piece about another beautiful song turned into a Capitol beast. Yet here we are—angered, saddened, sickened. And while people that enjoy the remix will undoubtedly say that fans such as myself don’t have to listen to it, it’s enough that it was deemed a necessary method to milk as much cash out of Katniss and Jennifer Lawrence as possible. It’s enough that it was even made. That it exists.

It appears that some people at Lionsgate and Republic really are fickle, stupid beings with poor memories, as Mr. Heavensbee would put it.

A 40-year-old mom to three living in Honolulu, Hawaii, Crystal Watanabe is a full-time freelance fiction editor.
@pikko
Previous Box Office Update: MJ2 Is the No. 1 Movie in the World with $247M Opening Weekend
Next VIDEO: Francis Lawrence on the Legacy of The Hunger Games