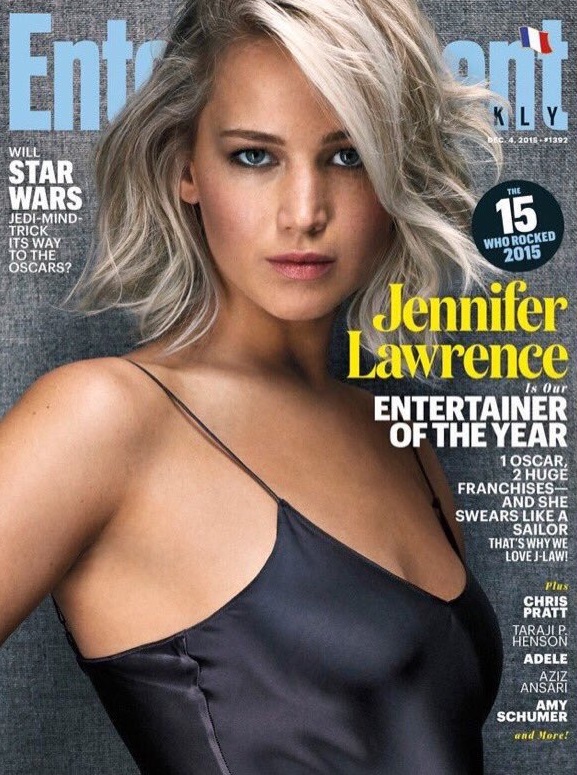 More and more tidbits are coming out from Entertainment Weekly‘s article on Jennifer Lawrence. The issue hits newsstands this Friday, with Jennifer herself on the cover as EW’s entertainer of 2015. She talks about her long-held ambition to be a director:

“I’ve signed on to direct something called Project Delirium — it’s based on this article about mental warfare in the ’60s, like an acid experiment gone terribly wrong.

“It’s funny, I’ve wanted to direct since I was 16 and always thought I should start making steps towards that. If I had tried to do it earlier, I wouldn’t have been ready. Now I actually feel ready.”

The article mentioned is called ‘Operation Delirum’ (which you can read here) published in The New Yorker in 2012.

She also spoke about what it was like to work with Chris Pratt in upcoming sci-fi film Passengers:

“Pratt is a bag of gummie bears. He is cotton candy in human form. He’s always in a good mood! He always has energy. The other day I got mad at him because he’s only positive. It was 4 a.m. and we had been working for 15 hours straight. I walk into the studio and Pratt has his phone in the air and is playing music and dancing around.” She laughs. “He’s so f—ing funny and nice. I think this movie is going to be awesome.”

Passengers is set to be released on December 21st, 2016. You can read more from Jennifer’s interview in Entertainment Weekly on newsstands this Friday. In case you missed it, we also have EW’s video interview with Jennifer here.