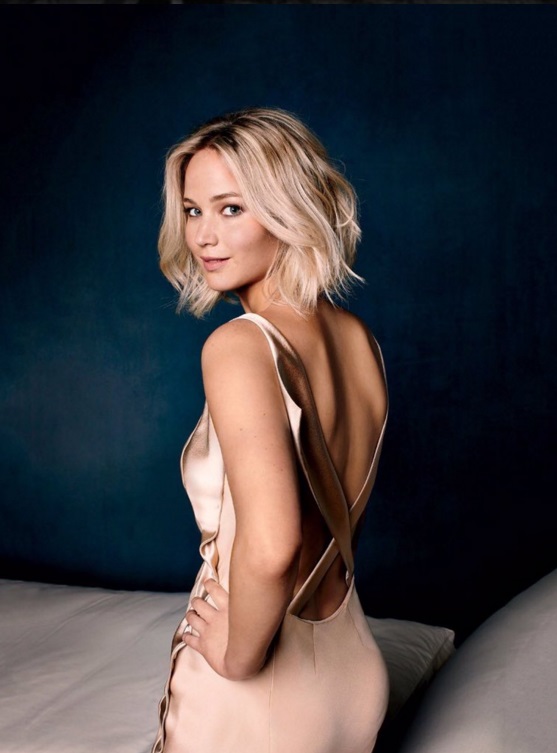 While promoting The Hunger Games: Mockingjay Part 2 in Berlin, Jennifer Lawrence spoke to Inquirer.net about Amy Schumer, Joy, leaving Panem behind and living in Los Angeles. On the tough ask of the bleakness of Part 2, Jennifer says:

“We tried not to glamorize the consequences of war. We tried not to glorify any of the violence, but to really show the gravity of war. Katniss doesn’t know any different.
“In the first movies, she grew up in District 12. It wasn’t until she began her journey on The Hunger Games and saw the unrest and frustration in all of the other districts, and when they could finally communicate, they could form this official rebellion and throw out the government.”

Earlier in the year she purchased a house in Los Angeles and was asked how she made it feel like home:

“I worked with great decorators from Kentucky. I used to always walk by this store called Bittners when I was younger. Bittners is fancy. We could never afford anything from Bittners at our house. I would always walk by and be like, when I grow up I’m going to have a house and I’m going to decorate it with Bittners!
“So that’s who I called when I got my house, which was incredibly inconvenient because they live in Kentucky. So everything had to come out in semitrucks, but I love it. Most of the furniture is from Kentucky. My coffee tables and kitchen table are old—made of wood from bourbon barrels. It’s homey and I like it. I’m changing little stuff. It’s too overwhelming to look at a house and try to decorate it, but once they decorated it, I feel like I can change little details.

Since she accepted the role of Katniss Everdeen, life for Jennifer Lawrence has changed rapidly. She reflects on the stratospheric rise in such a short space of time for someone so young:

“… learned a lot. If I had to sum up the biggest thing that I’ve learned, I feel that I’ve leveled out a lot more. I don’t think that I realized how much I was struggling to deal with everything in the first few years when everything was happening, because it’s so great. I love my life so much and I love my job… I was thinking about the positive things.
“I wasn’t cutting myself some slack for the difficult things. I wasn’t really taking into account how it was affecting me, because some of that was from growing up. At 25, you’re different than when you were 21. I feel a lot calmer and more level about everything. Things stop getting so shocking.

“It’s important to have moments of doubt. It’s important to look at yourself and question yourself and your choices, question things you said (laughs) because that’s how you grow, so I do have doubts, and I do question myself. But I’ve never felt like that’s a negative thing.
“On my strength, I’ve been alone, pretty much. I left home when I was 14, so I was alone a lot and I was in New York and it was scary. I was raised by rats (laughs) and that’ll toughen you up.”

You can read more of Jennifer’s interview where she talks about being a role model, how different she felt as a teenager, her fear of creepy stalkers and her lack of gardening skills at Inquirer.net.