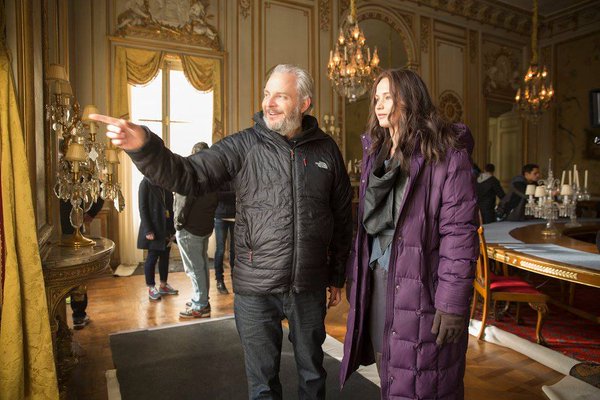 Francis Lawrence had a lengthy chat with Scott Mendelson of Forbes about saying goodbye, how he managed to retain the book’s bleak ending, his experience with Robert Pattinson fans, how he took over from Gary Ross in 2012, the use of IMAX in Catching Fire, who in The Hunger Games cast deserves more recognition, how they adapted Johanna for Part 2, why the series resonates with so many, criticisms of I Am Legend, the importance of the design of the lizard mutts, how a sequel would only interest him with Suzanne Collins involvement, why sequels/spin-offs/prequels may never be a good idea without Katniss and what’s next on the pipeline for him.

He also discusses the importance of the split of Mockingjay, the genius of Jennifer Lawrence and whether young fans are able to understand the subtext and satire of The Hunger Games when the marketing, such as at premieres, sometimes directly contradicts and mimics the Capitol.

Was there any talk, either you, or Lionsgate, or Miss Collins, about keeping the third book as a single movie? What was, the extent that you want to talk about it, what was the conversation that eventually resulted in splitting into two films?

You know, that conversation started before I came on board Catching Fire. Also, I was only signed on for Catching Fire at the time. They already had the plans for the release of the two movies, the two Mockingjay movies, they already had release dates set up for those. I do know that Suzanne really thought about it, and wanted to make sure that there were two distinct stories.
The only reason she agreed is because there are two really distinct stories. You’ve got the dramatic question in part one which is “Are we going to Peeta back?” and its own theme of propaganda and manipulation, and the second one of “Will Katniss take down the capitol?”
And because she knew that there were two very distinct dramatic questions, that we could split it. I also could quite honestly … it’s been an interesting thing, and if I remember correctly, you were actually a supporter of the first one, Mockingjay part one.
You know, we got a lot of flak for splitting the book in two. There was a fairly large, I would say, cynical backlash. The truth is, these ideas were really important to us. That movie is really important to me, and I think really important to the journey. I knew going in, it was the trickiest tonally.
It was the first time you’re going to take an audience out of the comfort zone of what these movies are. There’s no reaping, there’s no trip to the capitol, there’s no training, there’s no games. It’s much more political. Katniss is sidelined, she’s only going to shoot one arrow. Right? It’s going to be more claustrophobic. I knew that was going to be tricky, but it was an important chapter for Katniss to get to at the end. Looking at the entire series, it’s sort of the second act low point.

What I like about it, and you’re talking to somebody who’s favorite Harry Potter film is Deathly Hallows part one. I like the idea, because by virtue of splitting up in two, you have no choice but to concentrate on the character development. You have no choice but to emphasize the emotional and psychological torment of everybody that’s preceded it.
What I loved about the third film as a result of being able to split it up was, by the time the fourth film ends, it’s to me, more impactful because you’ve spent one extra movie with these characters. Especially characters that you don’t meet until the third film, the impact of their choices and their fates and revelations, is far more impactful because you’ve known them for two films instead of just one.

I agree. That’s what Suzanne and I just talked about before I left on the first tour. She had just seen the final film and we were talking about it, and we were just kind of looking back going “God, we don’t know how you do it all in one movie”. Unless you excise the propaganda movie out entirely, and you get Peeta back by the end of act one, and even then, I don’t know how you do it. And how do you go on a proper journey with Coin? You’ve barely spent any time with Coin. I really don’t know how you get to the ending in a satisfying way in the one movie.

You worked with Jennifer Lawrence from around, I’m guessing late 2012 till recently, how has she changed as an actress, as a person, what have you, between the three films that you’ve worked on her with?

It’s interesting, you know, in her heart and soul she hasn’t, as an actress, she hasn’t changed much. She’s always been a very instinctual and feeling actress. She doesn’t like to talk about her process a lot. She will if I want to, but she doesn’t like to.
She really likes to sort of be placed in the world and kind of planted somewhere along her emotional arch by me. She waits until you roll camera and call action, and she feels it, and she reacts. It’s always surprising, and very rarely does she make a wrong move. Usually she makes a really inspiring and surprising move.
That’s her genius. It’s been the same since I started working with her, and it’s the same now. She’s still very lighthearted, she’s still very genuine, and smart, and funny, and kind of goofy, in the best way. The biggest changes I’ve seen really, are just her having to kind of navigate the way the world has changed around her.
You know, she wasn’t quite as famous when we started Catching Fire as she is now. You know? She hadn’t won the Academy Award yet. Some of those other David O. Russell movies hadn’t come out yet, and things got ratcheted up, around the time she won the Academy Award, and around the time Catching Fire came out, it sort of … and she says this, it really changed into a different gear. That’s probably the most change I’ve seen, is just her kind of navigating the world.

Something that I frankly struggled with for the entirety of the films, as a critic/commentator, is that you see the way that the films are marketed and the way that so many of the fans react to the films, it’s almost like the films are about the perils of bread and circuses, and yet they are sold and arguably received in a very bread-and-circuses kind of way.
“Elizabeth Banks rocks a backless gown on the red carpet!” “Who should Katniss choose?” etc, etc. In your interaction with the fans, do you think that young fans get the subtext of the films, despite how they are marketed? And in that ideal world, what would you want the young fans to get out of these stories?

I think that fans get the kind of subtext that you’re talking about specifically, at various levels. I think there are some fans that definitely get it, and they get the sort of meta connection between the movies, the marketing, the bread and circuses of it all.
By the way, one of the things that I enjoyed doing in Mockingjay Part 1, is when we actually took some of the marketing and used it in the propaganda film in the film. It was like our propaganda story stuff, actually mirroring the advertising. That was kind of a nice loop there that I enjoyed.
…
Look, some people totally got it, and bought it, and found that sort of side of the story really interesting. I’m sure some, it kind of goes over some people’s heads or they’re not thinking about it. They’re more obsessed with the love triangle.
I think in the end, ideally, young fans are left thinking. Hopefully they’ve connected to the ideas in the movie. In the ideas of the consequences of war and violence, and they think about conflict, they think about war, and they think about revolution.
Sometimes, obviously conflict is needed, and sometimes revolution is needed, but you have to be very careful. It’s not black and white. It’s not clean. Even if it’s justified, even if it’s needed, there’s going to be loss, there’s going to be damage, and it’s permanent. I just hope people think about that after these movies.

You can read the entire interview (and it is well worth the read) over at Forbes.

Ciara works as a Script Supervisor, part-time film reviewer and full-time cinematic nerd.
@@Kiwimci
Previous VIDEO: Jennifer, Josh and Liam on Action, DJing and Missing Out on Visiting Korea
Next Snow’s Destroyed Statue Makes It Into Empire’s 25 Best Posters of 2015