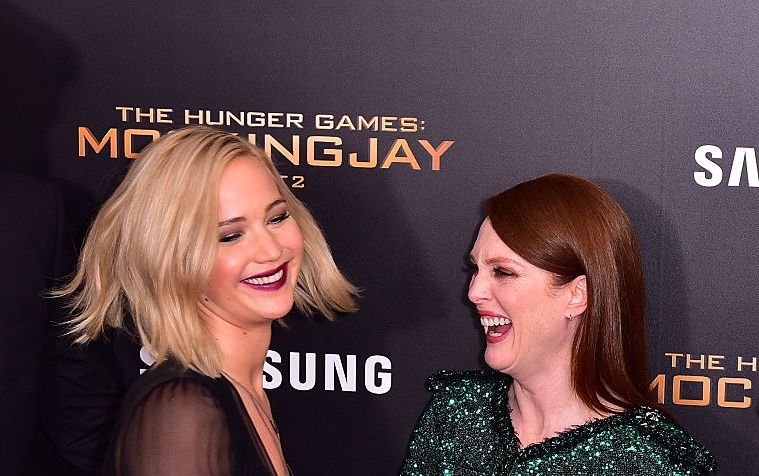 We heard Donald Sutherland call Jennifer Lawrence a genius earlier today, now let’s hear from her other presidential co-star Julianne Moore. Speaking to People at the L’Oreal Women of Worth in New York yesterday, Moore declared:

“She’s pretty authentic – that’s what’s so wonderful about her. I think what you see is what you get. You see it on screen and you see it in person.”

She was also complimentary of the Hunger Games cast and crew as a whole:

“It was a great group of people. It was so fun to be with them always and it was nice to have this last little press tour to be able to see everybody once again.”

We also have a hilarious and awesome video for you from Billy on the Street of Julianne Moore performing some of her most famous roles for people in Times Square in exchange for tips. Her Magnolia re-performance is as stunning as ever!

Give that woman another Oscar now!

Ciara works as a Script Supervisor, part-time film reviewer and full-time cinematic nerd.
@@Kiwimci
Previous VIDEO: Donald Sutherland Calls Making The Hunger Games Films An “Ambiance of Truth”
Next VIDEO: Hunger Games Cast and Crew on What They Like Most and Least About Each Other

Julianne Moore on Coin’s Evolution From Revolutionary to Power

Julianne Moore covers Modern Luxury's Angeleno and talks about deepening the arc of President Coin from the revolution leader of District 13 to placing herself in a position of power across the two Mockingjay films.