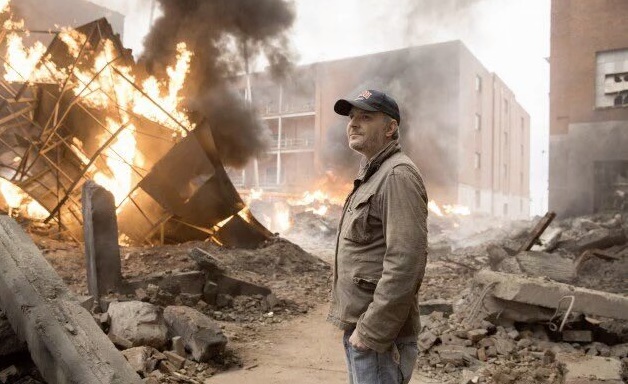 In the ‘Focal Point’ column of Filmmaker Magazine, Francis Lawrence gave yet another wonderful and insightful interview. Speaking mostly with the air of having finished what he had set out to do several years ago, Lawrence spoke about loving the books and Gary Ross’ first installment before being given the opportunity to open up the world of Panem in the sequels:

Filmmaker: What did you respond to at that point, and did it change over the course of directing three films?
Lawrence: It never changed. The thing that made me want to do the movies is that I saw the first Hunger Games as a sort of stand-alone genre or exploitation movie – something you might find in the ’70s. But in the grand scheme of all the books there was something thematic about the consequences of war and violence, and the second story, Catching Fire, was where that started to blossom; the world was opening up, and those themes and ideas rose to the surface before reaching their full potential in the final movie. That’s what drew me in, and it’s what I talked about when I first met with the producers. Luckily, everyone was on the same page and wanted to truly make the books without making them more “fun,” which I think a lot of people might have wanted to try with a project like this.

He touched upon the pressure he felt from the fans, stepping into the world they loved when he was unknown to them and about gaining the trust of the cast considering that they were all so close knit with Gary Ross during the filming of the 2012 opener, The Hunger Games:

Filmmaker: Speaking of the cast, you inherited most of them from the previous film. I presume they already had pretty strong ideas about their characters, so what was your role in terms of helping them shape their performances? And how did you put them at ease with you after they had started the series with another director?
Lawrence: Certain people did have firm ideas about the characters, but there was still the journey those characters take, which changes from movie to movie. So my approach was to talk about each particular story and what was different about it – the character of Effie (Elizabeth Banks), for example, goes through very different things in Catching Fire from what she experienced in the first Hunger Games, so that gave Elizabeth and I a lot of ideas and material to discuss.
To answer your second question, when I got the job and started prepping I called all the actors and started meeting with them. I chatted with Jennifer while she was in Prague shooting, and then when she got back to LA we had breakfast together and had a great conversation. Elizabeth and I got together, Josh and I got together, Liam…everyone welcomed me fairly quickly, and I was thrilled because I was inheriting a lot of great actors. The only one who was a little tricky was Woody [Harrelson], who is very loyal but takes longer to warm up. I think he was uneasy with the situation of having a director thrust upon him; he had signed on to do these movies with Gary and suddenly Gary left. He was feeling disoriented and wanted some time with me, so I flew to New York where he was doing a play and we hung out and talked about the character until he was more comfortable. Everyone else got on board right away, which was a nice surprise.

Lawrence goes in to detail about the different visual style of his and Ross’ film, his preference for wider angles and medium focal lengths and how he approaches character interaction in framing. He mentions the 1970s war films he and cinematographer Jo Willems watched to influence lighting choices in Catching Fire. He also delved in to his different process when using hand-held photography, the huge undertaking of filming a blockbuster, what he prioritizes on a daily basis of shooting and how he corrals the ensemble cast:

Filmmaker: How about the actors? You’ve got such different levels of experience here, from newcomers who literally grew up on set to veterans like Donald Sutherland. Do you have to modify your approach to suit each individual performer?
Lawrence: Yes, but not because of experience but just because each actor has a different approach. Julianne [Moore] comes in with very specific ideas and doesn’t need to talk about it that much, but she’s happy to talk a little bit, especially about blocking; Jen is very instinctual and hates to rehearse but needs to discuss her emotional arc ahead of time. On the other hand, Philip Seymour Hoffman loved to rehearse and talk about it and grind away at the character.

Filmmaker: Did that create problems when you had one actor, like Jennifer Lawrence, who hated rehearsal, and another, like Hoffman, who loved it?
Lawrence: No, because this group was really good…with the wrong people you would definitely have that kind of problem, but it wasn’t the case here. Jenn hates to rehearse, but she would do it with Phil because she loved him and respected him. She wasn’t going to deny him.

Now that the series is closed and people are already enjoying all four films at home with the Digital Download release of Part 2, Francis Lawrence looks back on his time making these stories:

Filmmaker: Getting back to the idea of what a massive, all-consuming endeavor this has been…now that you’re literally at the final stage of the process, putting the last movie out on Blu-ray and VOD, have you had any time to decompress and reflect on what the experience has meant to you?
Lawrence: It’s a long process – I don’t think there’s any one moment when you figure that out. There’s a lot of processing that one does when a movie is released; it’s a very vulnerable time for a filmmaker when the movie’s out there and everyone starts sharing their opinions, good or bad. You’re reading reviews and watching box office numbers come in and all that, and you start to think about this object that you’ve made and what it means to you and what it means to other people and what you could have done differently and how it’s perceived in the world…and was it worth it? That’s the strongest point of self reflection, the moment of release – there’s probably a thirty to sixty-day window when you’re thinking about it constantly. But I still think about it a lot. It was an unbelievably fulfilling experience for me doing three movies of this size so close together, directing basically seven hours’ worth of movie over three years and working with a story that I really believed in, with a cast and crew that had massive filmmaking talent and were wonderful people to be in the trenches with – you’re lucky in your career if those things can come together on one movie, let alone three.

You can read the entire interview at Filmmaker Magazine and we highly recommend you to do so.